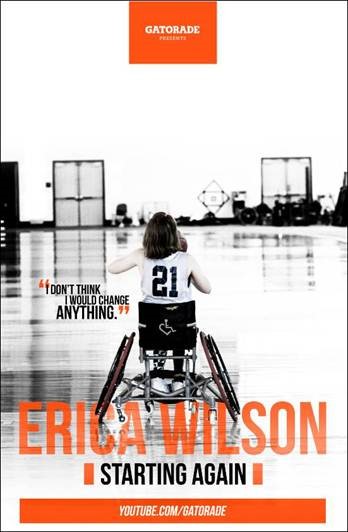 Sixteen-year-old Erica Wilson was an aspiring dancer, now the teenager is dealing with the loss of both of her legs due to a neurological disorder called transverse myelitis.

What started as a leg cramp turned into Erica never being able to walk again.

Now Wilson has turned to the sport of wheelchair basketball. A member of Birmingham, Alabama’s Lakeshore Lakers, Erica has set her signs on new dreams. With new found confidence Erica has began to excel at the active sport.

“This sport has enhanced me in general. It’s expanded my horizons as far as there’s more options for college not just to go there for academics, but you can go there and play a sport. I think that it definitely made me more social as well. Not only with teammates, but the communication skills I learn on the basketball team I carry over to school and everything else. It’s definitely improved me as an overall person.”

Erica has now turned her signs to playing at the college level and then even globally. Erica says one day maybe she could even coach children of the sport and says “I don’t think I would change anything” about her current condition.