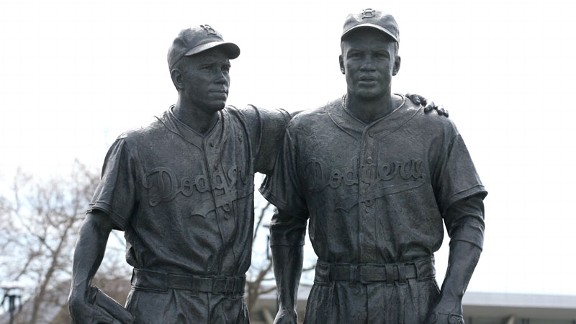 A statue of Jackie Robinson and Pee Wee Reese that is on display outside MCU Park in Brooklyn has been defaced.

The statue which features Reese with his arm around Robinson was littered with racial and anti-semiotic epithets as well as a swastika.

Among the hate-filled messages written in black marker on the monument to Robinson and his Brooklyn Dodgers teammate Pee Wee Reese were: “Heil Hitler,” “Die n—-r,” “F–k n—-r” and “F–k Jackie Robinson.”

The New York City Police Department is investigating the incident at the Coney Island ballpark. A ball park employee has said that there is video surveillance outside the ballpark.

“This is being treated as a bias crime,” detective John Nevandro of the 60th precinct said in a statement, via ESPN. “Hate Crimes will investigate the incident.”

Team employees successfully removed the graffiti from the metallic statue, but were having difficulty eradicating it from the stone base.