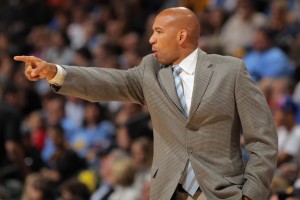 New Orleans Hornets head coach Monty Williams is not happy with the NBA’s concussion policy. The Hornets number one pick, Anthony Davis was not able to travel with the team to Chicago on Saturday for the Hornets game against the Bulls due to a concussion, ESPNChicago reports.

“When you’re dealing with the brain, I guess what’s happening in football has impacted everybody,” Williams said before the game against the Bulls. “He got touched up a little bit last night. That happens a lot in basketball. It’s just that now they treat everybody like they have white gloves and pink drawers and it’s getting old. It’s just the way the league is now.”

Davis got elbowed by teammate Austin Rivers during Friday’s game against the Utah Jazz.  The league prevents flying with a concussion.

“It’s a man’s game,” Williams said. “They’re treating these guys like they’re 5 years old. He desperately wanted to come, but he couldn’t make it.”

Williams said he thinks that players who suffer concussions should have more say on whether they play or not. He said that he suffered many concussions during his career and never had the restrictions that players nowadays have.

“I’m not saying I don’t like (the policy),” Williams said. “We’ve got to protect the players, but I think the players should have more say so in how they feel. I’m sure I had four or five concussions when I played, and it didn’t bother me. The NBA is doing what’s necessary to protect the players, but this is not the NFL. You don’t get hit in the head that much. I understand it. But as a coach, I’m a baby about it. I want my guys ready to play. That’s basically the bottom line; I’m just a baby.”

Even without Davis, the Hornets beat Chicago on Saturday 89-82.