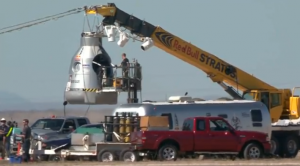 The launch of Felix Baumgartner for the Red Bull stratos live jump has been cancelled. Baumgartner planed to ascend to 120,000 feet in a stratospheric balloon and make a freefall jump rushing toward earth at supersonic speeds before parachuting to the ground.The record for a jump is 102,800 feet by Joseph Kittinger in 1960.

There was a five hour weather delay due to wind. After some test runs the team then encountered radio problems forcing another delay.

Ultimately the wind was too gusty for the jump and it was cancelled. Baumgartner was then taken out of his balloon.

Further information including when the jump will be rescheduled will be announced later.