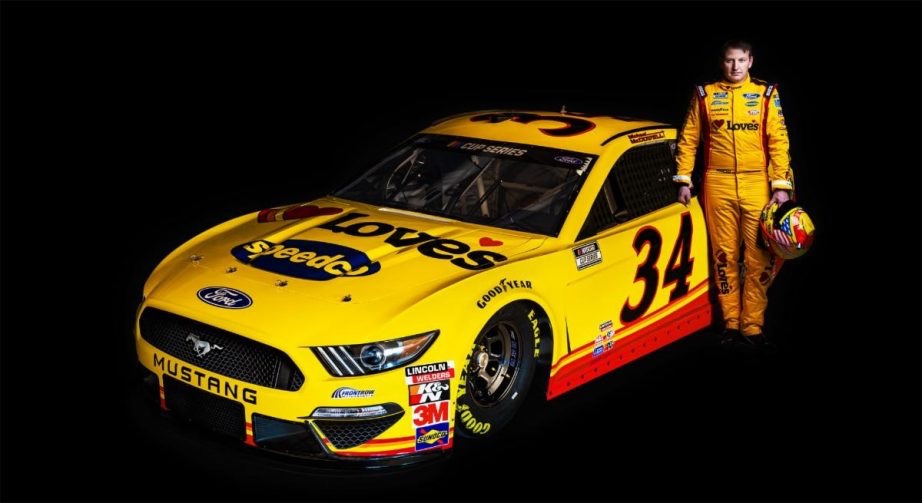 For the eighth consecutive season, the familiar yellow and red colors of Love’s Travel Stops will return to Front Row Motorsports (FRM) aboard the No. 34 Ford Mustang, driven by Michael McDowell.

For the Oklahoma City-based company, what began as a single race partnership back in 2013, has now grown into a successful multi-race program in the NASAR Cup Series. Love’s Travel Stops will serve as the primary sponsor on McDowell’s No. 34 Ford Mustang for multiple races in the 2020 season, including the season-opening Daytona 500 later this month, both NASCAR Cup races at Talladega Superspeedway and the spring weekend at the company’s home track of Texas Motor Speedway. Love’s will remain as an associate sponsor throughout the year, while returning Cup veteran Michael McDowell will serve as driver and ambassador for Love’s Travel Stops.

The family-owned company has grown its NASCAR program in its time with FRM and has incorporated its employees, vendors and business partners into the success of the program. Operating for over 55 years with more than 500 locations in 41 states, Love’s has grown to become one of America’s favorite travel stops, offering clean, modern facilities stocked with fuel, food and supplies for travelers.

“For me, every road trip begins with a pit stop at Love’s. It’s a place that I feel comfortable bringing my family to at any hour of the day,” said McDowell. “For the millions of professional truck drivers that spend long days on the road, and for families that may be passing by, Love’s is a safe and clean place to stop for fuel, snacks, a warm shower and many other needs.”

The No. 34 Love’s Travel Stops Ford Mustang will make its 2020 NASCAR Cup Series debut during Speedweeks at Daytona International Speedway.