Drew Brees has said it again, he thinks NFL commissioner Roger Goodell is misusing his power.He is backing former team mate Scott Fujita’s Wednesday’s statement saying,  “I agree with everything that Scott Fujita said in his statement. I thought it was a strong statement, certainly very true.” 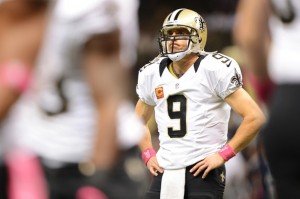 In Fujita’s statement, he questioned the commissioners decision to push for an 18-game regular season, Thursday night games and employing under qualified replacement referees to start of this season. He said that Goodell is disappointed in him, but that “the truth is, I’m disappointed in him.” Fujita said.

Fujita, who  now plays for the Cleveland Browns, accused Goodell of a “condescending tone” and called the commissioner’s actions “an absolute abuse of power”.

Bree’s told NFL a.m, “This  could go on for a while because, certainly our players are not satisfied with some of the things that Commissioner Goodell has claimed or said,” Brees said. “It seems like so much of his suspensions have been based upon speculation and rhetoric and maybe the testimony of some pretty unreliable sources. So that’s the unfortunate thing — it seems like his decision changes quite a bit and at least the reasoning behind what his decision is. So that is the disappointing part of it for all of us.”

This all comes in reaction to Goodell reaffirming penalties last Thursday involving  Jonathan Vilma, Scott Fujita, Anthony Hargrove and Will Smith in regards to the bounty gate.

Honestly, we are wondering when Brees will be knocked down a notch for speaking out like he has been. Nothing against Brees, but ripping the commissioner doesn’t seem very professional either.