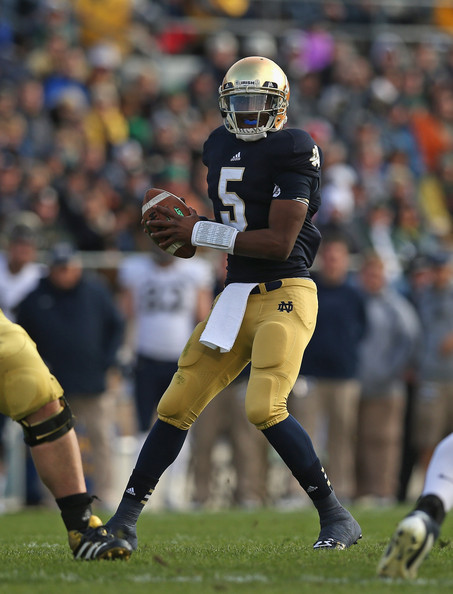 On a day they were outplayed the Notre Dame Fighting Irish found a way to win. The Irish were trying to avoid an upset at the hands of a Pittsburgh Panther team and keep their National Championship hopes alive.

They did just that defeating Pittsburgh in the third overtime of tough fought game. Everett Golson was able to sneak into the end zone giving Notre Dame a 29-26 victory. The win moves Notre Dame to 9-0. As important as the win was so were the strides made by Golson.

“To win a game against a solid football team in Pitt, we are happy to be 9-0” said Notre Dame coach Brian Kelly in a post game interview with Alan Flanagan.

Early Golson could not muster up the same command in which he operated against Oklahoma. The ground game struggled to get going with Theo Riddick or Cierre Wood. The man out of the bullpen, Tommy Rees, came out throwing blanks. Man’ti Teo was barely mentioned.  The defense collapsed in the second half.  The Irish committed three turnovers compared to zero from Pitt. Yet, Notre Dame found a way to rally from a late 14 point deficit and win.

This is the stuff that championship teams are made of, defeating teams who see these games as their National Championship appearance.

The Irish took an early lead as Kyle Brindza kicked a field goal , it was matched by one off the foot of Pitt’s Kevin Harper. Brindza briefly gave the Irish a lead with his second field goal but after that it was all Pitt.

Ray Graham ran for a 16 yard touchdown as Pitt claimed the lead. Just prior to halftime Notre Dame missed a field goal which would have cut the Panther lead to one.

Rees came into the game in the third quarter to quarterback for the Irish after Golson was briefly knocked from the game. He threw a critical interception. It would lead to Pitt’s Tino Sunseri completing a 9 yard touchdown to J.P. Holtz with just over five minutes to go in the third quarter.

The Panthers would add another field goal to take a 20-6 lead into the fourth quarter.

Notre Dame had chances. Plenty of them. All of the complaints and flaws that had been discussed about the Irish were on display. Golson converted a 4th-and-1 with a 7 yard quarterback sneak on the Irish’s first drive of the fourth quarter. Multiple times the Irish quarterback took shots to the end-zone on the drive. The Irish avoided disaster on the drive when DaVaris Daniels fumbled the ball after contact with the ground.

Initially the play was ruled a fumble but was overturned after a review. On a fourth and four the Irish caught a break when Pitt was called for pass interference. Golson then connected with T.J. Jones for a touchdown. Unfortunately for the Irish Brindza would miss the extra point.

Notre Dame would march the length of the field on their next drive. aided largely by runs by Everett Golson. However the drive ended when Golson threw a pass in the end zone which was intercepted by K’Waun Williams. Williams was the Panther who was called for pass interference on the Irish’s last drive. The interception ended a 15 play 91 yard drive.

The Irish defense buckled down forcing a three and out. Golson then completed a 45 yard pass to Davis and followed it up with a 5 yard touchdown pass to Reddick. With the Irish down by two Golson converted the two point conversion with a run.

Golson and Notre Dame would have another chance in regulation thanks to another defensive stand. That drive would never get started as Golson tripped and lost 8 yards on its first play.

Eventually the two teams headed to overtime. Each team managed a field goal on their first possession. On the Irish’s second possession they marched down and were inches away from the end zone. Cierre Wood dove for the end zone but had the football jarred lose, it was recovered by Pitt.

Kevin Harper missed a 33 yard field goal on Pitt’s following possession. Harper would connect for a field goal in the third overtime for Pitt.