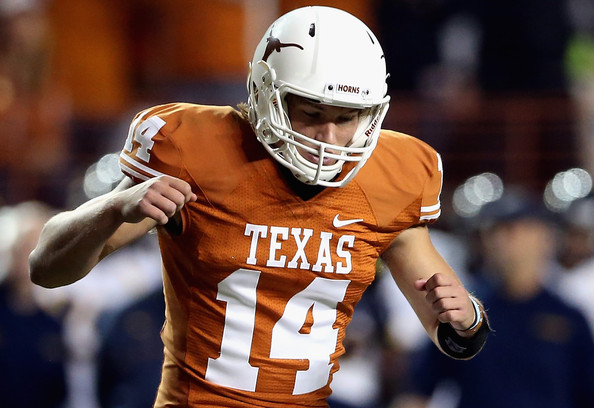 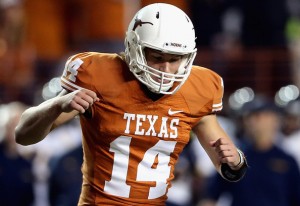 Case McCoy came in late against Kansas to lead the Texas Longhorns on a game winning drive last Saturday night. The touchdown pass from McCoy to D.J. Grant with twelve seconds left gave the Longhorns a 21-17 victory over a woeful Jayhawks team.

The Longhorns turned to McCoy after starting quarterback David Ash was ineffective. Ash threw two interceptions and was just 8-for-16 for a head scratching 63 yards passing. Ash almost highhandedly cost Texas, a 23 point favorite, a game against a one win Kansas team.

McCoy came in for Ash late in the fourth quarter and promptly went 5-for-7 for 68 yards, leading the Longhorns on two touchdown drives. The win moved the Longhorns to 6-2 overall, 3-2 in the Big 12 while the Jayhawks fell to 1-7 overall, 0-5 in the Big 12.

Even with the heroics of McCoy there will be no change at quarterback yet. Texas’ head coach Mack Brown has stated that Ash will be the teams quarterback this week when the Longhorns travel to Lubbock to play Texas Tech.

“David’s body of work has been pretty good,” Brown said, adding that he “would not hesitate” to pull him for McCoy if Ash doesn’t play well.

That has not stopped McCoy from preparing as if he will play Saturday. “I always prepare to be the starter,” McCoy said, “and that’s all I’m going to say about that.”.

Ash has been one of the better quarterbacks in the nation at times this season but has not thrown a touchdown in the last three games. Ash has thrown for 1,726 yards and 12 touchdowns.