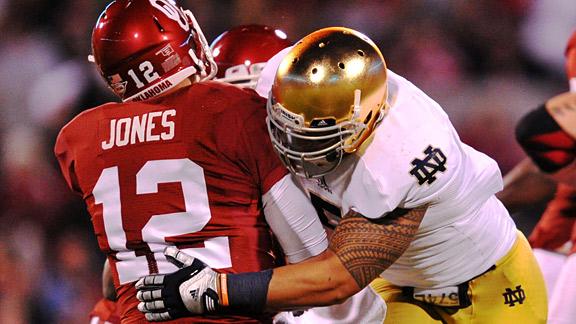 Notre Dame is more than relevant after win against OU

With Saturday’s win against number eight Oklahoma the Notre Dame Fighting Irish have left any questions to whether they are “back” or not. The Irish entered the game as double digit underdogs and left with a thrilling victory.

Under Bob Stoops the Sooners have never been a pushover. Earlier this year Oklahoma dropped a game against Kansas State but knew that they still had an outside chance at a National Championship if they won out the remaining games on their schedule. Oklahoma had never loss two home games in a season under Stoops and prior to Saturday night had only lost four games at home in fourteen years. 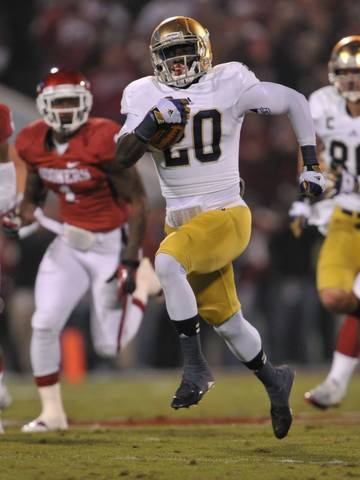 While Notre Dame still has games remaining on their schedule the only true test should be a season-finale against USC. That game will be played at the Coliseum and may have major impacts on the National Championship.

Manti Te’o seems to have everything you would want in a young man. The kind hearted leader of the defense recorded his fifth interception of the year in the fourth quarter. Whether it will be enough to convince Heisman voters remains to be seen but he is clearly in the discussion.

The Notre Dame ground game also was up and running. The combination of Theo Riddick and Cierre Wood totaled 148 yards and scored both Notre Dame touch downs.

Questions will still be asked about Everett Golson but he did not let a hostile Norman, Ok crowd get to him. Golson may not have put on a clinic throwing the ball, just 13-for-25 with 177 yards but he did nothing to hurt the Irish either. His ability to return from a big hit in the third quarter showed that the sophomore had plenty of toughness.

Notre Dame hosts Pittsburgh next week. The Panthers are 4-4 on the season after a 47-17 thrashing of Temple.