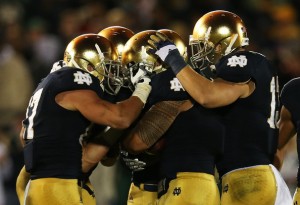 The Notre Dame Fighting Irish will visit Norman, OK this weekend. Awaiting the Irish will be the Oklahoma Sooners. The Sooners are a double digit favorite and for good reason, Oklahoma has lost four games in fourteen years at home since Bob Stoops took over the coach reigns.

Few think Notre Dame have a chance against the Sooners. The better question may be how much better is Oklahoma better then Notre Dame. The line for this game opened at nine and has been bumped to eleven at most places.

Oklahoma has scored 52 points or more in each of it’s last two games. the 44.7 points the Sooners average per game is the fifth highest in the nation. The Sooners have disposed of their opponents with ease in recent weeks since their staggering loss to Kansas State.

Notre Dame is off to a 7-0 start but now they have to go into Norman. Notre Dame has had to rely on three come from behind victories along the way in wins against Purdue, Stanford and BYU. The Irish were favored in each of those games and also failed to cover the spread in each contest so perhaps too much credit has been given to them.

Of course Notre Dame has also blown out Navy, Miami and defeated the likes of Michigan State and Michigan.

Everett Golson will return as the quarterback for Notre Dame after sitting out against BYU following a concussion in the teams previous game.

The best thing Notre Dame has is it’s defense. They have allowed only 9.4 points per game. Another thing that should help Notre Dame is it’s ground game. If the Irish can run the ball consistently against the Sooners then this game should play a lot closer then the double digit spread.

In the end it is tough to envision Notre Dame holding Oklahoma close early on. Should the Sooners push across a few early scores then Notre Dame will have to shy away from their ground game and turn to a less productive passing attack. If this should happen then Oklahoma has the potential to put up another forty-plus points even if it is against Notre Dame’s defense.