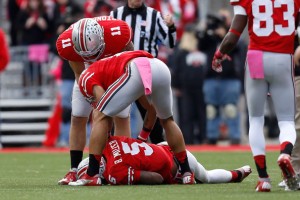 Ohio  State quarterback Braxton Miller left Saturday’s game with an injury, later he was taken to the hospital. The injury came at the end of a 37-yard run when Purdue cornerback Josh Johnson tackled the Heisman hopeful.

“He passed all of the tests and he’s getting ready to be released,” said team spokesman Jerry Emig, who added that there were no symptoms of a concussion or other serious injury.

Emig said he had spoken to head coach Urban Meyer who told him, “(Braxton is) doing fine.”

Miller appeared to hit his head on the turf and was down for several minutes before being helped off the field. Later he was moved from the bench to a cart and later to the hospital.

”I think it’s (his) head and that concerns all of us,” Ohio State coach Urban Meyer said after the game.

Ohio State later sent out a release saying Miller had been cleared and would be released from the hospital:

“Ohio State quarterback Braxton Miller left the game against Purdue late in the third quarter. He was taken to the Wexner Medical Center, on the campus of The Ohio State University, because of concerns of a possible concussion. He was examined — head, shoulders and neck — and he has been cleared. He is symptom free of all ailments and he is doing fine. He is in the process of being released from the hospital.”

The Buckeyes rallied behind Ken Guiton and Carlos Hyde to defeat Purdue 29-22 in overtime after they trailed 22-14 with just minutes to go.