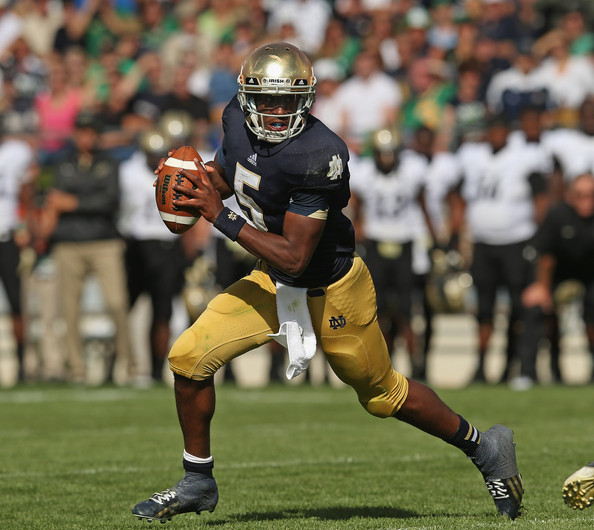 Everett Golson was firing on all cylinders last week in Notre Dame’s 41-3 trashing of Miami. Golson was collected, accurate and took what Miami gave him and burned them. It was also against Miami, one of the worst defenses in college football. The Hurricanes have allowed thirty plus points on average to their opposition.

Putting the filters on we began to wonder how much Notre Dame’s offensive success was because of Golson and how much of it had to do with the poor defense of the Hurricanes.

Already Tommy Rees has replaced Golson as the quarterback in games this season. Rees rescued the Fighting Irish against Purdue and again against Michigan.

Golson will get the start on Saturday against Stanford because he has been the starter this year and because of last week against Miami. Rees is the more experienced quarterback who will be there to try and rescue the Irish if they fall behind again.

Fortunately for Notre Dame there are a few players who have graduated from Stanford over the past three years. The exits of Tony Gerhart and Andrew Luck during that span have taken Stanford to a middle of the pack offensive school. This is something the Irish’s defense will key in on this week.

The Irish have a defense which is good enough to win a championship. The Irish are keeping their opponents out of the end zone and prevent the big play. As Matt Fortuna of ESPN points out “In its past three games, Notre Dame has held opponents to a 26.2 completion percentage on passes thrown 10 yards or more downfield, with no touchdowns and five interceptions. The Irish were the beneficiaries of four drops in those games.”

Everett Golson will need to continue to show what he showed last week against Miami. He will need to do it against better defensive schools. This week offers one of those chances.