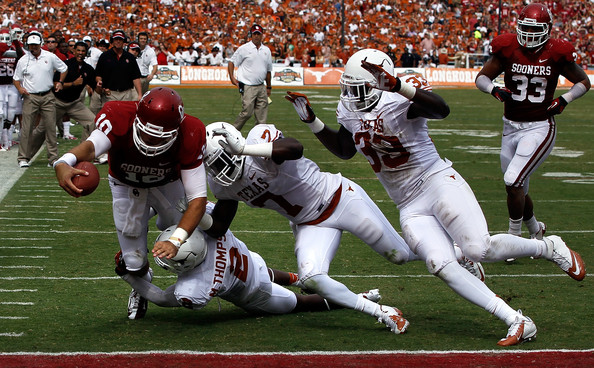 The Texas Longhorns were handed again this week. The latest beating came at the hands of the rival Oklahoma Sooners. Last week the Longhorns were beaten by West Virgina.

Against West Virginia the Longhorns proved they could not stop a capable offense. West Virginia ran and threw the ball at will putting up 48 points.

When Oklahoma and Texas met in Dallas the Longhorns could not even fire on offense. A team averaging over 40 points a game managed 2 points in the first half and that was on a blocked extra point attempt. The ground game was unable to get started after a big game against West Virginia and the passing game would convince one that David Ash was successful in previous games

With over five minutes to go in the second quarter the sea of burnt orange leaving the cotton bowl told the tale of the game. Oklahoma had their way with Texas on both sides of the ball.

Commentator Brad Nessler questioned if he had seen a game as one sided as Saturday’s match-up. Texas had been successful against lesser teams by wearing them down with their larger players. They had been able to come back against Oklahoma State because the Cowboys share many of the same weaknesses.

The loss to Oklahoma should end any talk of Texas being in a BCS bowl. Backup Sooner quarterback Blake Bell torched them for four touchdowns on the ground. Damien Williams ran for 145 yards, in the first half.

The game did not need a second half. Texas was proven to be a fraud. Unfortunately for the Longhorns those quarters had to be played too.