Miami Heat super star Lebron James and his longtime girlfriend Savannah Brinson have tied the knot according to multiple reports.

James and Brinson have been together since high school.

The wedding took place in San Diego, Calif., on Saturday. The ceremony was very private – and the couple has yet to release any details.

According to The Associated Press,  “About 200 guests were present for the ceremony. The ceremony was the highlight of a three-day celebration that will conclude with a brunch on Sunday.”

US Weekly reports that the couple exchanged vows at the Grand Del Mar hotel and that Heat All-Star guard Dwyane Wade was among the celebrity guests in attendance. NBCSanDiego.com reported that Knicks All-Star forward Carmelo Anthony, rapper Jay-Z and pop star Beyonce were rumored to be be in attendance while CBS8.com added Clippers All-Star guard Chris Paul to that list.

James and Brinson, 27, have been together since high school and have two sons. James, 28, proposed just after midnight on Jan. 1, 2012 in South Beach. The engagement ring was said to of costed $300,000, so with that info alone — we can’t even begin to estimate the cost of their lavish wedding extravaganza. 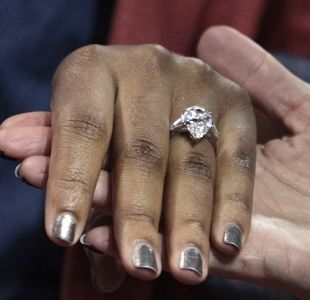