When traveling though an airport there are plenty of things you should not say or do. The most obvious airport no-no is mentioning the word bomb.

Peter Friesema is a referee for the Western Collegiate Hockey Association and Central Hockey League. Friesema made the mistake of mentioning the word late Saturday night while traveling through Ted Stevens Anchorage International Airport. 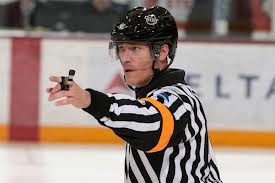 Apparently Freisema’s bags luggage sticker was swapped with that of another passenger with whom he was flying with. After being told that the bags were going to the same destination.

According to the Anchorage Daily News the gate agent heard Friesema comment “But my friend’s bag has a bomb in it.”  The result was a trip to jail and hundreds of other passengers inconvenienced when the airport was evacuated until 3 am.

Friesema contends he said “what if my friend’s bag has a bomb in it?”

Assistant District Attorney Adam Alexander said Sunday his comment was “perhaps an effort to be funny or flirtatious,”

Friesema was charged with disorderly conduct and the FBI has now gotten involved and may change him with making terrorist threats.

The WCHA released the following statement

The Western Collegiate Hockey Association today (Oct. 15) announced that men’s referee Peter Friesema has been suspended indefinitely from his officiating duties with the league pending a review of an off-ice incident that occurred at the Anchorage International Airport on Sunday, Oct. 14.

The WCHA will have no comment on this matter until all the facts have been gathered and the investigation completed.

Friesema lives in Highlands Ranch, Colorado which is roughly a thirty minute drive south of Denver.