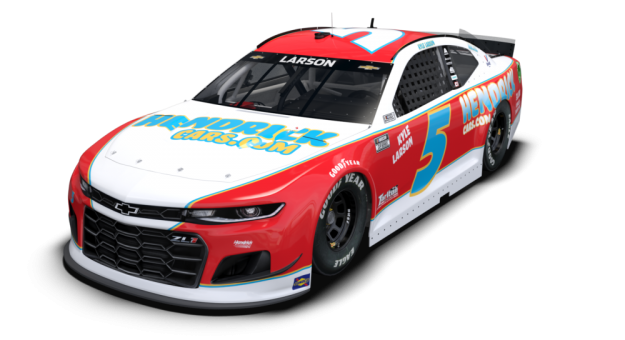 Kyle Larson’s dirt racing roots are well known on the NASCAR Cup Series circuit, and now the driver of the No. 5 HendrickCars.com Chevrolet Camaro ZL1 1LE will pay homage to the start of his racing career for the throwback event at Darlington Raceway.

On Thursday, the throwback ride for the No. 5 Chevy was revealed and brought back a wave of nostalgia for Larson and his father, Mike Larson. It’s reminiscent of Larson’s first go-kart, which ultimately was the first step in his racing career.

“It’s neat that they allowed me to throwback to my first go-kart,” Larson said. “A big shoutout to Hendrick Automotive Group for that. We could have easily done an old Terry Labonte scheme or something like that, but for them to allow me to get back to my grassroots of how I got my career started is definitely special to myself and my family.”

Larson started racing in the late 1990s after his dad purchased a go-kart from their neighbors. The Larsons slowly started to build the brand and soon the whole family was involved in setting a foundation for Larson’s career. Mike Larson would work on the car while Kyle’s mother, Janet, became a supportive presence at the track after she was surprised when a go-kart appeared in their driveway.

“Kyle and I made the decision to buy that car, didn’t say anything to Mom,” Mike Larson said. “It was one of those ‘Let’s just keep this to ourselves and get the car home, and then we will deal with the apologies.’ We pushed that car from that house, about 100 yards away, over to ours and rolled it up into the garage, and I remember her coming out saying, ‘What is this?’ Kyle and I just both kind of smiled at her and said, ‘We’re going racing.’ Obviously, she accepted it, but that car was orange – that was their colors.”

Along with the revamped go-kart scheme, Larson will don a firesuit and helmet similar to the one he sported more than 20 years ago. Mike Larson quipped Kyle was so excited to have his first firesuit that he slept in it the night he got it, even though it was only $170. The helmet also a special item that Mike Larson helped create.

“My dad painted a helmet for me and then it got stolen out the back of our truck after a race,” Kyle Larson said. “So, this is the second custom-painted helmet I had. My dad painted the first one and our neighbor and friend, Gary Morgan, painted this one.”

Perhaps the most important element to the throwback orange scheme will be the “MAJ1K” decal on the side. It became the Larson family’s brand named after Mike, Kyle’s sister Andrea, Janet and Kyle.

“It’s cool that I get to have it on my car,” Larson said. “I think my dad came up with it. So, it’s M-A-J; back then, it was M-A-J-I-K, which stands for ‘Mike, Andrea, Janet, including Kyle.’ Because my number was 1K, we got rid of the ‘I’ and incorporated the 1K into that. That was important for me to get that logo on the car because that is our family team logo.” 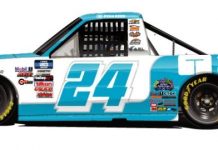 Ryan Reed to Compete for GMS Racing at Darlington Raceway 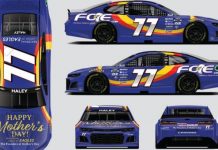 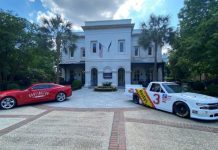