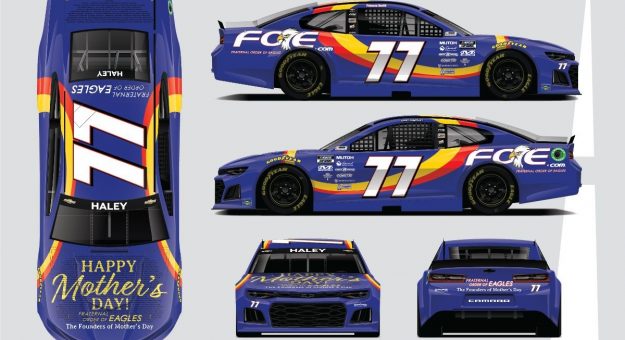 Spire Motorsports and the Fraternal Order of Eagles (F.O.E.) will honor Mother’s Day with a commemorative Robert Pressley throwback paint scheme aboard Justin Haley’s No. 77 Chevrolet Camaro ZL1 1LE during the Official Throwback Weekend of NASCAR at Darlington Raceway.

The Official Throwback Weekend of NASCAR is beloved by the entire NASCAR industry for paying homage through special paint schemes to NASCAR Hall of Famers, legends, team owners and valuable sponsors across the history of the sport.

“The Jasper car stood out at a lot of places,” said Pressley. “I think the fans really enjoy seeing those old paint schemes because they bring back some memories. I’m not saying that’s when the real racing was, but one thing we can all agree on – through the late ‘90s and early 2000s, we packed every grandstand we went to, so somebody was doing something right back in that era. I really feel fortunate that I got to race during the heyday of NASCAR. The Pettys, the Pearsons, Yarboroughs and Allisons built the foundation for us and it seemed like we were the ones who capitalized off of it.

“Darlington has a lot of great memories for me, but it’s one of the places that I believe if you can ever win a NASCAR race … you want to win at Daytona or Darlington. I think Darlington would have been my favorite place to win.”

Meanwhile, Haley’s No. 77 Chevrolet will carry the names of hundreds of mothers, incorporated across the hood and decklid of his machine. The names were gathered and submitted to honor the mothers of  members of both the F.O.E. and Spire Motorsports.

For more than a century, the second Sunday in May has been set aside to honor mothers everywhere – and it all started with a push from the Fraternal Order of Eagles. On February 7, 1904, Fraternal Order of Eagles Past Grand Worthy President Frank E. Hering made a public plea to recognize mothers everywhere. A decade later, President Woodrow Wilson signed a proclamation making Mother’s Day a reality.

The achievement remains one of the most significant milestones in the history of the organization. From preparing brunch to buying cards and flowers, the spirit of Hering and the F.O.E. lives on through America’s actions each Mother’s Day.

“The F.O.E. is incredibly proud to continue our relationship with Spire Motorsports by honoring Mothers around the world at Darlington,” said Dave Smith, F.O.E. Grand Worthy President. “As proud founders of Mother’s Day, we’re grateful to have this opportunity to share our history and continue to work with the amazing people at Spire who shares our values and commitment to service.”

Haley’s entry will also carry the name of Smith’s late wife, Frances Smith, over the passenger side door.

The Smiths immigrated from their home of Scotland to Canada in 1973. They began their relationship with the F.O.E. in 1980 and continued their service to the community and the F.O.E. in the years that followed. Mr. and Mrs. Smith traveled North America together promoting the F.O.E. and raising money for a variety of charities. She was a proud mother of two, grandmother of four and great grandmother of one who loved spending time with her family whenever possible.

The Goodyear 400 will also mark Haley’s first NCS start at the “Track Too Tough to Tame.” In three previous Xfinity starts at Darlington Raceway, the Winamac, Ind., native has earned one pole, one top 10 and hasn’t finished worse than 13th.

“I’m stoked about the opportunity to celebrate Mother’s Day at Darlington with the support of the Fraternal Order of Eagles and pair that with a really awesome Robert Pressley throwback paint scheme,” commented Haley. “Darlington is such an iconic race track and to this day, still lives up to both of its famous nicknames. You can call it ‘Too Tough To Tame’ or the ‘Lady in Black’ but those nicknames apply the same today as they did back in the ‘60s. The layout is so unique and the speeds are just incredible. it’s an intimidating place but I’ve run pretty good at Darlington all three times I’ve raced the Xfinity car there.

“I’m also honored to carry the names of hundreds of mothers whose impact and influence are felt exponentially across the F.O.E. and Spire Motorsports. Without those amazing women, none of this happens.”

The Goodyear 400 from Darlington Raceway will be televised live on FS1 Sunday, May 9 beginning at 3:30 p.m. Eastern Daylight Time. The 12th of 36 races on the 2021 NCS schedule will be broadcast live on the Motor Racing Network and SiriusXM NASCAR Radio Channel 90.