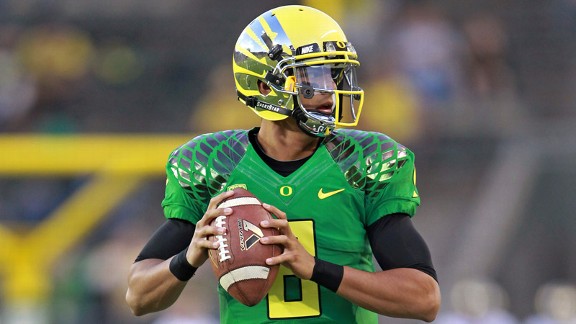 After months of talk and weeks of speculation the trophy went to Mariota in a landslide as he more than doubled the points of second place Melvin Gordon of Wiscosin. Mariota received 2,534 points out of a maximum of 2,787 including 788 of the first place votes. Third place finisher Amari Cooper was second in first place votes with 49.

Last year’s Heisman winner Jameis Winston finished sixth receiving just 51 points and four first place votes. Mariota and Winston’s teams will face off against one another on Jan. 1 in the Rose Bowl as the inaugural college football playoff gets underway.

Mariota received the second-highest percentage of possible points (90.92) in Heisman history, behind only Ohio State quarterback Troy Smith, who had 91.63 in 2006. It is worth nothing that Reggie Bush received 91.77 percent of the vote during the 2005 season but that his award was vacated due to the breaking of NCAA rules.

Mariota is the ninth QB to win the Maxwell, Davey O’Brien, and Heisman Trophy awards in same season, and first since Cam Newton in 2010.