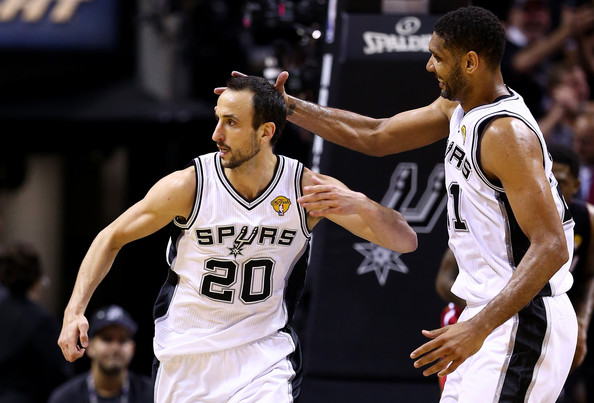 Up 3-1 in the NBA Finals against the Miami Heat, the San Antonio Spurs wasted no time closing things out on Sunday night to win the NBA Championship.

A season ago the Spurs appeared on their way to defeating the Heat to win the title when the Larry O’Brien trophy appeared near the end of Game 6 driving the Heat to a series win. There was none of that this year.

With less than five minutes left in Game 5 the Spurs pushed their lead to 20.

The Spurs placed together a series of high percentage shots and their usual style of dependable defense winning their fifth NBA Championship, all of which have come since selecting Tim Duncan as the first overall pick in 1997.(1999, 2003, 2005, 2007, 2014)  Head coach Gregg Popovich joined the team in 1996.

The trio of Duncan, Manu Ginobili and Tony Parker have a NBA record 118 NBA Playoff wins.

This was the third time that Duncan and LeBron James had met in a NBA Finals series. The Spurs last won the NBA Championship in 2007 against a Cleveland Cavaliers team that featured James. Now will begin an offseason of speculation about the future of James whose contract with the Heat is up.