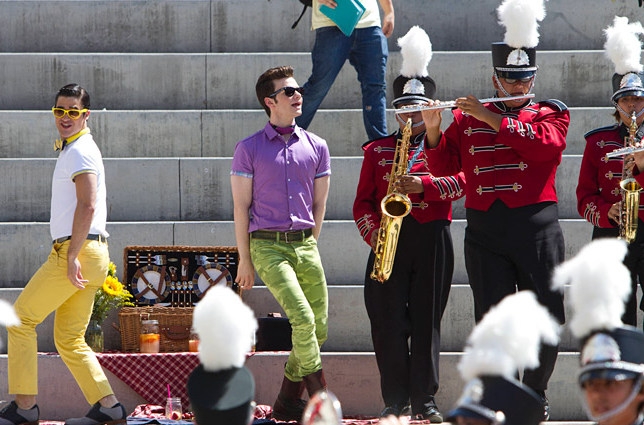 The Glee Season 5 premiere last night was filled with happiness, sadness, excitement, and fear. The New Direction’s took on The Beatles, in what will be a two part episode, the second half airing next Thursday.

The show did not even glance at Cory Monteith’s passing – as they will be paying tribute to the star during the third episode of the season, before going into their normal Fall break. (With the show presumably returning Nov. 7)

The show started recapping on last season, when we go into Rachel’s call back for her “Funny Girl” audition. The Director cut her off and sent her on her way. She overheard him discussing with his partner how she might be too green for the role, when the show transitioned to the opening song of the season,”Yesterday.”

Santana gets Rachel a job at a singing diner. The director from her audition shows up, and she confronts them. He says that she will most likely be a star, but just not yet – and that everyone in that diner wanted to be a star. Rachel decides to prove she has star potential, she then goes on to perform “A Hard Days Night” with Santana and the rest of her co-workers.

Artie and Kitty are seen flirting, and go on a date to a local carnival, then we dive into a group performance led mostly by Artie and Kitty to “Drive My Car.”

At the end of the date, Kitty is met by a cheerleader we haven’t seen before, who tells the two that they are “cute” together and that she posted a photo of them on Instagram together. Kitty tells Artie that she has feelings for him, but she has a reputation to uphold at the school – so they need to keep their feelings on the downlow.

The scene transitions into “You’ve Got To Hide Your Love Away” a duet between the two. Artie meets Kitty, “under the stars.” on multiple occasions throughout the song. The whole Artie and Kitty thing, seems very rushed – as later on towards the end of the episode Kitty decides that time is short, and she doesn’t care who knows about their relationship.

We move onto Blaine and Kurt having a picnic lunch together on the courtyard steps. Blaine tries to convince Kurt to get back together again, and Kurt agrees with very little convincing. Blaine says he has prepared a song for him, but before he can jump into it – Kurt interrupts him and says he has prepared something himself.

Kurt jumps into, “Got to Get You Into My Life,” as they leap on a picnic table and lead the marching band around in a flirty push and pull punctuated by a kiss.

Now that they are back together, Blaine goes back to his plans of proposing to Kurt. Blaine asks the Glee club, and all the other rival glee clubs for help in the next number.

This is when Blaine also decides to help cheer up Tina, who has been bitter by pulling Ryder, Jake and Sam together for a classic Beatles performance of “I Saw Her Standing There” and offering themselves up to her choosing for a prom date, where she chooses Sam because he is the “least gay, and least asian”

Blaine’s proposal plans get underway. Burt Hummel is driving Kurt to the “airport” but really it is to go to the proposal. Kurt tells Burt that he knows he is driving him to his proposal.

Kurt says he doesn’t know what he is going to say.  Burt offers that he met Kurt’s mom young, and he’d never wished he’d waited because he didn’t know how little time he’d have with her. But he won’t go as far as to tell Kurt what to do, only to tell him to go listen to what Blaine has to say.

Kurt walks up to the doors where Blaine propel him through Dalton as the various choirs join together to sing “All You Need Is Love” until Kurt arrives on the stairwell of their first fateful meeting.

The second part of Glee sings The Beatles is next Thursday – don’t miss it!