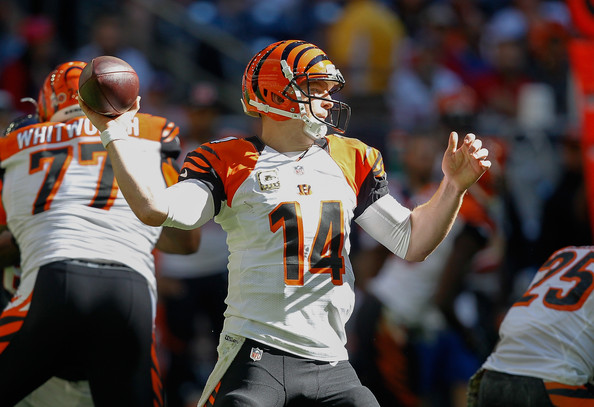 Andy Dalton will being the 2015 season as the starter for the Bengals and the rest of the depth chart is not expected to change much behind him.

While back-up Jason Campbell will need to be re-signed the teams official website and offensive coordinator Hue Jackson seem to believe that the team will enter the season in much the same way they finished the last one at quarterback.

“He’s our guy and we’re not going to shy away from that,” Jackson said of Dalton. Quarterbacks coach  Ken Zampese added, “He was better with the intangibles this year and the ball was better coming out of his hand. You could see that right away when he came back from the last offseason.”

A.J. McCarron spent much of last season rehabbing and was inactive to close out the season.

“I thought Jason did a sensational job in the role we asked him to play,” Jackson “AJ was finally getting healthy and looking like himself.  I think all three of them need to have a great offseason and we’ll see where it goes. I know Jason. I know what he brings to the table. You always like to have guys back that you’ve been around and know what you’re trying to accomplish. We haven’t had those discussions yet and we’ll get into them as we go.”

Given a lack of depth at quarterback in the draft and that Dalton is clearly the starter there is no reason to waste a draft pick on a new signal caller in the draft. The team will once again live and die by the running game and the game manager duties of Dalton.