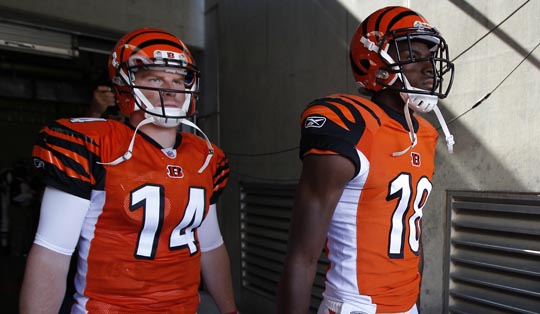 As the quarterback of the Cincinnati Bengals, Andy Dalton has received a large part of the blame for the teams inability to win a playoff game in recent years.

“We came in together. That’s my guy. He helped me where I am. I helped him and we took the Bengals to a different level,” Green said. “The Bengals were losing a lot before we came. I feel like we turned it around.

Both players joined the Bengals in 2011 with Green going fourth overall and Dalton being taken in the second round.

“I know they know he’s the guy…I feel like they’re going to get something done before the season starts.”

Rather than blame Dalton for the teams playoff loss to San Diego, Green says it is a team effort.

“A lot of people give him crap about not winning a playoff game, but we’ve made the playoffs the last three seasons. We’ve won 10 or more games (twice). Playoff games…we’re still young. I feel like we’re going to win them, it just takes time.”

Dalton completed 61.9-percent of his passes for a carer best 4,293 yards and 33 touchdowns in 2013. Of course the biggest knock against Dalton is the 20 interceptions he made during the regular season. With new offensive coordinator Hue Jackson the Bengals are expected to place more of an emphasis on the run, something that should make that number drop.