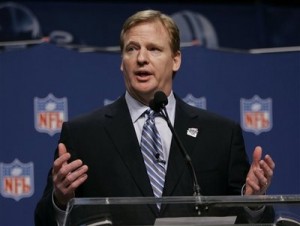 This is the latest round of a tug of war between the NFL and the four players. The latest punishment by Goodell  is slightly altered from his previous decision.

Vilma, who would have been able to return from the physically unable to perform list this week, is now suspended for the season again.

Scott Fujita, now a Cleveland Browns linebacker, is suspended for one game after originally being docked for three games. Anthony Hargrove, a free agent, had his suspension reduced by a game to seven gamers. Hargrove will get credit for time served but must miss two games if he is signed by a new team. The four-game suspension for Saints defensive end Will Smith was unchanged.

Before announcing the new punishments Goodell met with the affected players over the last two weeks.

“The quality, specificity and scope of the evidence supporting the findings of conduct detrimental are far greater and more extensive than ordinarily available in such cases,” Goodell wrote in a memo the NFL clubs.

“In my recent meetings with the players and their counsel, the players addressed the allegations and had an opportunity to tell their side of the story. In those meetings, the players confirmed many of the key facts disclosed in our investigation, most particularly that the program offered cash rewards for ‘cart-offs,’ that players were encouraged to ‘crank up the John Deere tractor’ and have their opponents carted off the field, and that rewards were offered and paid for plays that resulted in opposing players having to leave the field of play.”

The players can appeal the discipline again to Goodell or pursue more court action, including a federal case that the NFLPA filed on behalf of the three players separate from Vilma. And it’s still unclear whether Vilma will revise the legal strategy that resulted in his defamation case against Goodell.