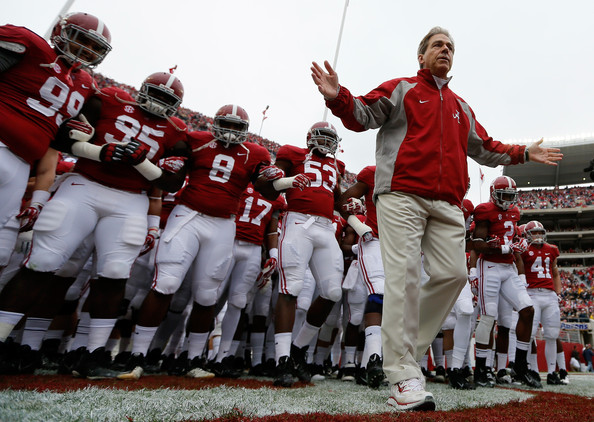 Nick Saban signed a contract extension to remain the head football coach at the University of Alabama on Friday. On Saturday Saban told ESPN reporters the he never considered leaving Alabama for the head coaching job at Texas.

“The way this sort of got spun, it was a little bit more like, ‘OK, he got a new contract at Alabama, so he’s going to stay at Alabama instead of going to Texas,'” Saban told ESPN.com on Saturday. “I never considered going to Texas. That wasn’t even a conversation.”

Saban agreed to an extension with Alabama roughly the same time that Texas was holding its annual football banquet. While the Longhorns failed to clear up speculation on the job of coach Mack Brown the name Nick Saban can be ruled out for 2014.

“I have a tremendous amount of respect for Mack Brown,” Saban said. “Mack Brown is the coach at Texas. He deserves the right, based on his body of work, to be able to leave the program the way he wants to leave the program. It wasn’t fair to him or to me to be speculating about this job, which I haven’t talked to anybody there about.”

“Really, the whole thing from my perspective stunk, but there wasn’t a hell of a lot I could do about it.”

Saban denied interest in the Texas coaching job but reports still ran attempting to link him to the spot. It would have been hard to replication the success that Saban has had with the Crimson Tide who have won three of the last four National Championships. Saban just wants the talk of him leaving Alabama to end.