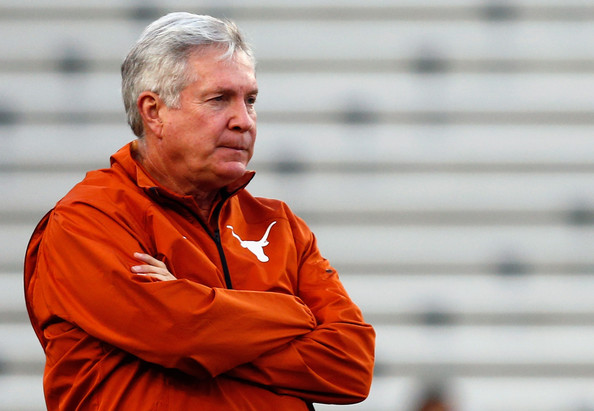 Mack Brown to step down at Texas says souces

Mack Brown denied a report earlier today that he was poised to step down as the head coach at the University of Texas.

Brown has been the head coach of the Longhorns for the last 16 seasons winning a National Championship but has struggled in recent years to field a championship caliber team.

Pressure has mounted in Austin with Brown’s job status becoming a weekly topic on pregame shows. Now ESPN has joined in reports that Brown will step down.

Texas coach Mack Brown is expected to resign by the end of the week, a source told ESPN’s Brett McMurphy.

“I know Mack, he’s friend, this is his decision, but he wants to tell his players and staff and not read it on the internet,” the source told ESPN. “That’s why he reacted strongly to the (Orangebloods.com) report.

“I’d be real surprised if it hasn’t happened by Friday night with the (Texas) football banquet. I think it will be taken care of. It wouldn’t drag on much longer.”

“By the end of the week, that will be the outcome,” the source told ESPN. “That will happen. It’s a shame after 16 years he’s not able to do it on his own with dignity and grace.”

Obviously all this has been followed by more rumors of Nick Saban going to Texas.

While Mack Brown may be out at Texas soon the program owes him a lot of gratitude for returning it to respectability.