The last two weekends have been difficult for the head coach of the Texas Longhorns. Mack Brown has had to answer questions in regards to why his team lost. The Longhorns lost to West Virginia in a closely fought shootout but against rival Oklahoma they were blown out. 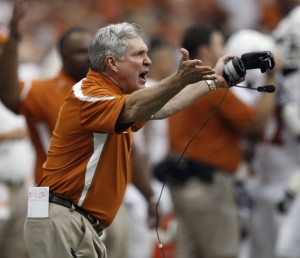 Texas was not just blown out, they were humiliated by Oklahoma. It has become a familiar scene under Brown. Two schools travel hundreds of miles to meet outside the Texas state fair and the team from Austin gets manhandled. Texas never looked in the game from the beginning and by midway though the second quarter there was a sea of orange leaving the Cotton Bowl.

The calls for Mack Brown to step aside got louder. In fairness to Brown he did return the school to promise and won a National title, their first in 30 years. This season Brown and the Longhorns had peaked at 11th in the college football rankings before suffering their first loss. One could easily make a case that the Longhorns were coming back.

Two losses will do that to you. When your defense is no where to be seen and your rising-star quarterback looks awful someone is going to get blamed.

Maybe Brown had done such a great job that everyone started to expect even more or maybe they are just tired of losing to Oklahoma. Brown insists that he is not retiring and vowed that he was “going to get this fixed.”

It has now been three years since that BCS Championship loss to Alabama. It can question what would have happened had Colt McCoy not been injured but what can not be questioned is the downward spiral of the Texas program since.

This weekend Brown leads the Longhorns against Baylor. Brown needs a win. Things will get ugly. In fact Brown needs to win big. He needs a whooping the size of the one Oklahoma laid on him last week.

The problem for Brown this week comes in the form of Baylor’s offense. In many ways this weekends game against Baylor may play out much like the one against West Virginia. Baylor is 4th in the nation in scoring and 121st in points allowed. If Baylor’s number 1 ranked passing attack takes advantage of Texas’ questionable corners this can get ugly fast.

Winning or losing against Baylor can be the difference between an 11-2 season or an 8-5 season for Texas. If Brown suffers the latter those calling for him to move on will only grow.