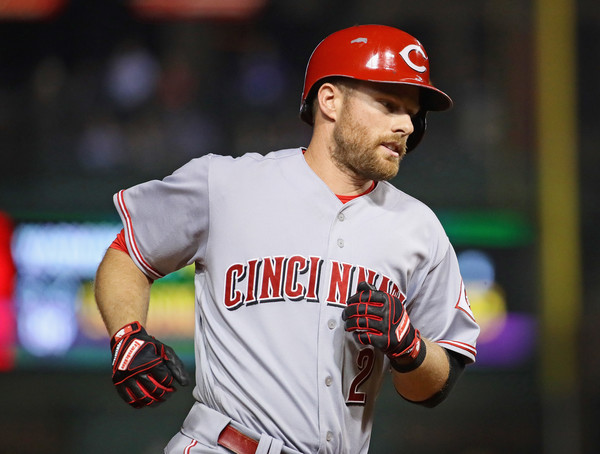 HomeNewsCozart signing begs question, Are the Angels any better than last season?
News

Cozart signing begs question, Are the Angels any better than last season?

The Angels are rivaling the Yankees as the most headline grabbing team this winter. After missing the playoffs following a series of late season moves the question now has to be asked whether or not the Angels are any better than they were a year ago?

Retaining Justin Upton was big for the Angels. In fact I’m going to call it their biggest offseason move. Upton could have opted out of his contract with the Angels but the team give him an addition year on his contract, which actually lowered his average annual salary. Upton gives the Angels a legitimate offensive threat to go with Mike Trout. An All-Star last year, Upton hit .245/.357/.531 with seven home runs and 15 RBI in his 27 games with the Angels. His defense is not going to be featured on a how to clinic but it’s good enough where he does not give all of his offensive value back due to a lack of range or miscues.

While Upton may have been the first task of business this year, Shohei Ohtani was the headline grabber. A two-way Japanese import, Ohtani has been compared by some to Babe Ruth. Perhaps we should slow down here. Babe Ruth wasn’t even Babe Ruth when he joined baseball so heralding a 23-year-old the second coming of the Bambino is a little much. With the presence of Trout and Upton it’s a fair question as to whether or not Ohtani is even the best player on his team.

At his best Ohtani is a top of the rotation hitter who can grab some plate appearances at DH and the outfield – though the Angels do not plan to plan him there this year. Ohtani still has to answer questions of how his raw talent will translate to the majors and prove his elbow is okay.

Of course we’d be re-missed if we did not discuss the butterfly effect of allowing Ohtani to play DH. Albert Pujols is not getting any younger but the dollars continue to roll in for him and he does offer some pop still so the Angels may now be left moving him between the DH spot and first base. Pujols is no longer the defensive player he was in his prime playing just six games at first last year and 34 over the last two seasons. Ohtani getting at-bats at DH is going to force the Angels to play Pujols at first more often.

Ian Kinsler was acquired in a trade with the Tigers. His salary of $13 million was not a hurdle for the Angels. Of course how much better he will be than Brandon Phillips is up for debate. I was a little surprised the Angels did not make a more public effort to retain Phillips but given he hit just .255/.26/.382 in 24 games compared to the .291/.329/.423 he had with the Braves maybe the front office was convinced someone different was needed. Kinsler (.236/.313/.412) is coming off the worst offensive year of his career and turns 36 in June. Fans will find out during the season if the Angels improved at second base or not.

The latest signing was Zack Cozart. This is really the signing that raised our question: Are the Angels any better than last year?

Cozart has been a star defender at shortstop. Problem is the Angels are one of those teams who actually have a even better player at the position in Andrelton Simmons. So instead of playing shortstop, Cozart will play third base for the Angels. Honestly, you have to like the idea of Cozart playing third next to Simmons and you may even ask the question as to how anything will get past the left side of the field. Fair enough but still the Angels are really banking on Cozart’s bat here. In signing Cozart they choose him over Mike Moustakas who set a Royals record with 38 home runs a year ago.

Cozart was no slouch with the bat last year. He set career highs in almost every statistical category including a .297/.385/.548 slash line, 24 homers while tying his career best of 63 RBI. The Angels gave him three years and $38 million to try and replicate those numbers but even the casual observer knows that Anaheim is a fair more difficult place to hit than Great American Ballpark in Cincinnati.

Luis Valbuena was an average player last year according to WAR. He hit .199 while offering 22 homers and a glove that Mike Scioscia replaced late in games. Add in that Yunel Escobar could rarely find the field and you can understand why the Angels opted to sign Cozart though somewhere it bears warning that he played just 122 games in 2017 and 121 in 2016. Such a situation could leave far more playing time for someone else than Scioscia may want.

The biggest question about the Angels will revolve around their pitching staff. Ohtani is one question but it’s the other four guys that are going to make or break this season.

Of the pitching returning it was JC Ramirez (24) who made the most starts, He finished the year 11-10 with a 4.15 ERA.Ramirez makes for a decent middle of the rotation guy which could probably also be said about Parker Bridwell who was 10-3 with a 3.64 ERA in 21 games, including 20 starts last year.

The Angels have a collection of middle of the rotation guys, many  who have injury concerns.

Adding Jim Johnson to the bullpen is a decent gamble but the Angels bullpen is still in need of help. Blake Parker and Noe Ramirez are solid as is Keynan Middleton but expecting Blake Wood to suddenly figure things out and counting on Cam Bedrosian is going to leave for some nights of antacids.

After writing all this I still have no idea whether or not the Angels are any better than they were at the end of the 2017 season. This team seemed to have just enough to stay in the Wild Card hunt but not enough to win a trip to the post season much less the World Series. They will enter the 2018 season already having these guys on their roster which will help but given that the Astros remain in their division a Wild Card berth may be the ceiling for this team. Even then I’m not convinced they are any better than the Astros, Yankees, Red Sox or Indians.