The most historic broken bat in San Fransisco has been returned to Hunter Pence. The broken bat which had been named Fryer by the Giants outfielder made contact with a ball three times in National League Championship Series Game 7 against the St. Louis Cardinals. The result of the bat making contact three times resulted in two runs for the Giants. The Giants would win the game 9-0 to advance to the World Series.

Both the bat and ball were then sold for $400 by the Giants at the teams store. 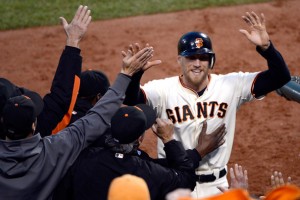 Pence later tried to find the bat only to be told of it’s face. Pence was bummed. “I just want to have it at home and show it to my kids,” said Pence.

Fortunately for Pence and the Giants the couple which bought the bat were die-hard Giant fans Rick and Terri Alagna.

“We didn’t realize how awesome the bat was until we got home and watched the replays,” Terri Alagna said. “We were just like, ‘Oh, my gosh.’ ”

The couple arranged to return the bat to the Giants and received an autographed bat by Pence as well as a stay in a luxury suite for Game 1 of the World Series.

They knew Pence would want to keep something like that, so they arranged to give it back to him during Wednesday’s Game 1 of the World Series — which they happened to watch from a luxury suite, courtesy of the Giants. The couple also received another bat autographed by Pence in exchange for Fryer.

“We’re really passionate fans,” she told the San Francisco Chronicle. “This is our team. Our sons, they’re older now. They’re in their 20s. They’re Eagle Scouts. We’re active in the Scouts community, so honesty is a big thing with us.”