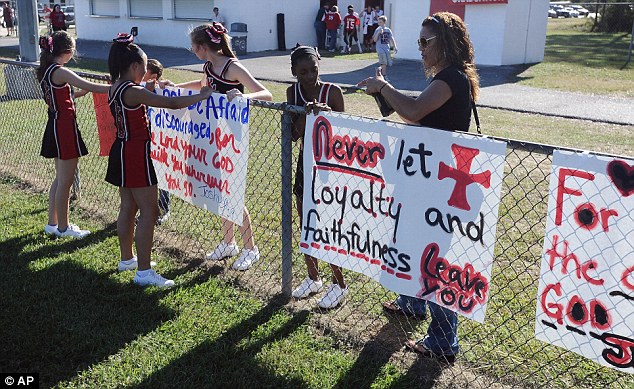 Cheerleaders in the small Texas town of Kontuze will be able to continue using their biblical banners at their schools football games. A judge granted the girls a two week extension while he determines if the banners violate the First Amendment.

State District Judge Steve Thomas extended the temporary order he granted last month to allow the banners. The decision is a temporary win for the squad, who have rallied the support of their community and now have nearly 50,000 fans on a Facebook page devoted to their cause. 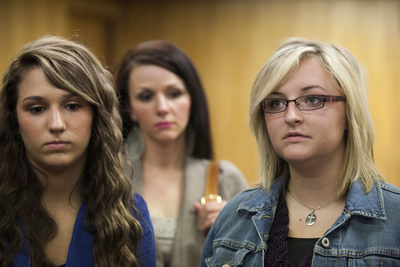 “We were sitting around a table at cheerleading camp this summer when we got the idea. The messages are all very positive. I don’t think it’s very fair to say we can’t do it,” Macy Matthews (seen right), 15, said.

“These signs are more encouraging and more positive to both sides — not just our team, but the other side and the coaching staff and everyone,” her mom Coti Matthews, 31, told The Daily News.

“The girls don’t shed their individual rights just because they walk on a football field,” she continued. “The school doesn’t provide the uniforms or pay for the supplies to make the banners.”

After one game in mid-September, school district officials decided to prohibit the cheerleaders from writing the messages, and an administrator announced the decision over the high school intercom. Weldon, the superintendent, said his decision was in response to a letter he received from the Freedom From Religion Foundation calling the banners unconstitutional. The Wisconsin-based group is made up of atheists and agnostics.

In response, a group of 15 cheerleaders and their parents sued the Kountze Independent School District and its superintendent, Kevin Weldon, claiming that prohibiting the students from writing Christian banner messages violated their religious liberties and free-speech rights. 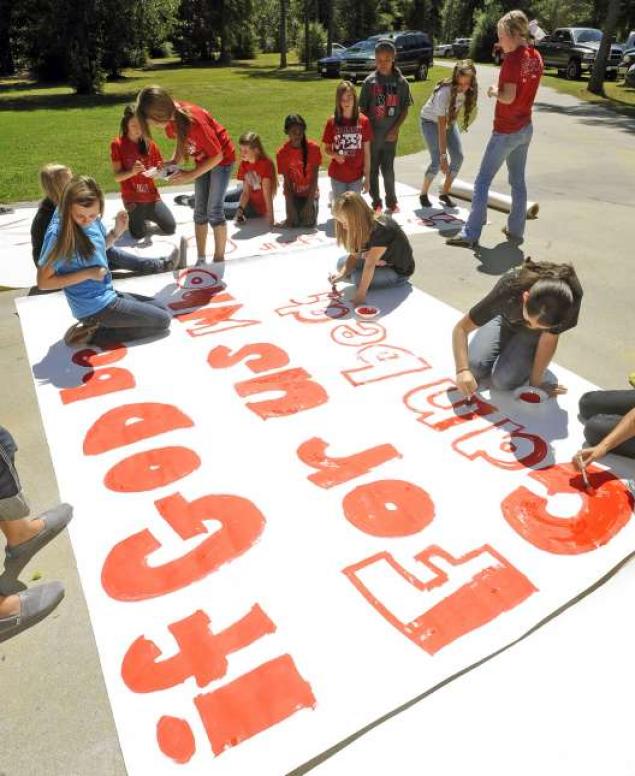 On September 20 the Liberty Institute persuaded a county judge to issue a temporary restraining order allowing the students to continue displaying their banners.  Attorney General Abott followed up with his backing of the cheerleaders, informing Kountze school officials in a letter that they were wrong to prohibit the students’ gesture. Abott went as far as pointing out that “the Supreme Court has never ruled that religion must be ‘kept out’ of public schools.”

“You could hold your John 3:16 sign in the audience as a parent or student and be protected. That’s your right. But it’s quite a bit different here,” the school district’s lawyer Tom Brandt says.

“The cheerleaders have a constitution and rules and regulations,” he argued Friday. “They’re told by the school they can’t go on Facebook and Twitter and say things that will bring discredit to the school. They’re representatives of the school.”

“Look, we want to make it very clear: No one is hostile to religion here,” he continued. “The superintendent is Christian. Every one of the members on the board is Christian. They believe the messages are good. If it were up to them personally, they would like them shown. But they took an oath and need to obey the law.”

The cheer squad’s underlying free speech lawsuit, backed by the Plano, Texas-based Liberty Institute, is expected to move forward no matter what the judge decides in the coming weeks.