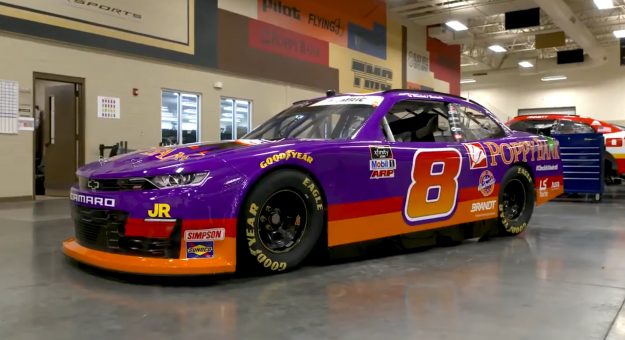 In a career that spanned 30 years, the Bethlehem, Pa. native raced in nearly every type of major motorsports over his career, which ran from 1983 through 2012. Those included all three of NASCAR’s national series, CART, IRL and Indy Car, the Rolex Grand-Am sports car series, all three of USAC’s national divisions and the NHRA Top Fuel Dragster series.

Andretti, who died earlier this year at the age of 56, could drive anything, and he proved it over and over again.

JRM is honored to pay tribute to the life and legacy of John Andretti with the No. 8 #PoppyBank Chevrolet that @DanielHemric will pilot @TooToughToTame. The colors and graphics reflect Andretti’s familiar 1995-96 Cup Series scheme. #CheckIt4Andretti #JohnAndretti pic.twitter.com/6jHrmCnBhL

While he accomplished so much on the track-two NASCAR Cup Series victories, winning the Indy 500 Rookie of the Year in 1988, a Rolex 24 Hours of Daytona victory, a CART World Series Indy Car victory are among his triumphs-his #CheckIt4Andretti campaign to help detect and fight the ravages of colon cancer may be his biggest accomplishment.

JR Motorsports and its No. 8 team with driver Daniel Hemric will honor Andretti’s legacy by running a paint scheme recalling the 1995-96 Kmart/Little Caesar’s machine in which the Pennsylvania native earned the pole at Darlington in 1995.

“The key to pulling off a successful throwback scheme and theme is having something that directly has an impact on your life or your racing career or your team’s racing career and history,” Hemric said. “This year, there’s so much more meaning being able to pay tribute to John Andretti and the entire Andretti family, one of the true wheelmen of the sport.”

Of course, NASCAR fans will remember Andretti not only for his two NASCAR Cup Series victories-at Daytona and Martinsville-but for being the first driver to attempt the Indy 500-World 600 double on Memorial Day weekend in 1994. Andretti finished 10th at Indy and 36th at Charlotte.

Just the sheer volume and variety of the cars Andretti drove is enough to impress even the most avid race fan. From the tough little bullring at the Indianapolis Speedrome in a USAC Midget to his career at the Indianapolis Motor Speedway and NASCAR, John Andretti did it all. In 1988, he joined with his cousin Michael Andretti and uncle Mario Andretti to finish sixth in the 24 Hours of Le Mans. In 1993, Andretti climbed into Jack Clark’s Taco Bell Top Fuel dragster at Atlanta and promptly defeated defending NHRA champion Joe Amato and Tommy Johnson Jr. in the first two rounds of the Southern Nationals before losing to Mike Dunn in the semifinals.

Andretti won at Surfer’s Paradise in the CART series in 1991, his only Indy Car victory, but competed in 12 Indy 500s, earning a best finish of fifth, also in 1991.

“It’s an incredible story when you look back at all of what John did not only in NASCAR but in all of motorsports,” Hemric said. “When you think of the Andretti name, it just gives me goosebumps thinking about it. It’s going to be really cool to go through and have a weekend and have the blessing of his family to support us through it.”

Hemric’s No. 8 Poppy Bank Chevrolet will carry not only the purple and orange colors of Andretti’s Michael Kranefuss-owned stock car and Andretti’s signature above the passenger-side window, it will carry the hashtag #Checkit4Andretti, designed to increase the public’s awareness of the importance of colonoscopies. One of the major goals of the campaign is to decrease the age at which the tests become mandatory.

Hemric, crew chief Taylor Moyer and the No. 8 Poppy Bank team will compete this Saturday, Sept. 5, at Darlington Raceway. The live broadcast will air at 12:30 p.m. ET on NBC. 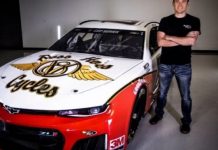 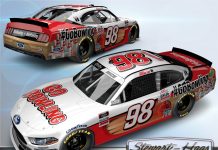 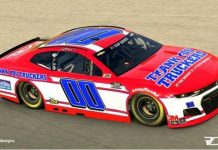