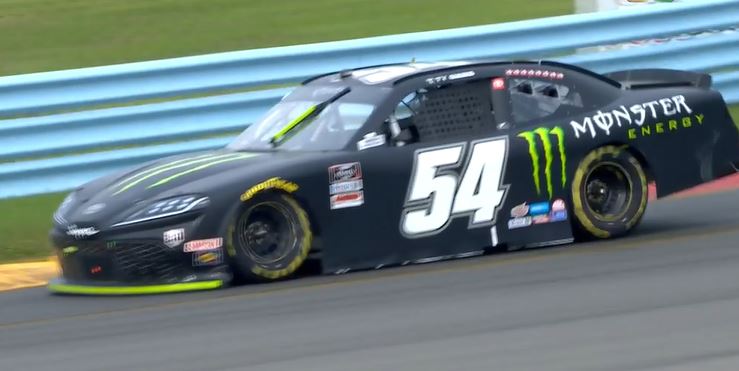 Ty Gibbs would win his third NASCAR Xfinity Series race of the season at Watkins Glen on Saturday.

Austin Cindric would clear the car of Justin Allgaier on lap one and chart the course for the field as Saturday’s running of the Skrewball Peanut Butter Whiskey 200 began. Ryan Sieg and David Smith would spin on the first lap of the race but the first caution would not come out until lap four when Michael Munley got into the tire barrier.

Several big names would stay out on the track during the stage break including Allgaier, Brandon Brown, Harrison Burton, and Austin Dillon while AJ Allmendinger would be the first car off pit road. Gibbs would get around Brown for the lead. Alex Labbe would bring out a caution on lap 34 when he got stuck in turn one. Allmendinger would win the stage as it ended on lap 40.

When racing resumed it was Gibbs out front. Myatt Snider would spin on lap 47 but caution came out on lap 49 when Matt Mills got into the tires on the bus stop. Austin Dillon retired from the race on lap 53. Daniel Hemric would give up the lead when he pitted on lap 56 giving the lead to Gibbs.

Erik Jones would bring out a caution on lap 68 when he lost his brakes and went into the wall while running ninth.

With seven laps to go Kyle Weatherman would exit his car on the back straightaway bringing out a caution. Allmendinger would get around Gibbs for the lead with four to go on the restart.  Gibbs would get back around Allmendinger in turn six with three to go.