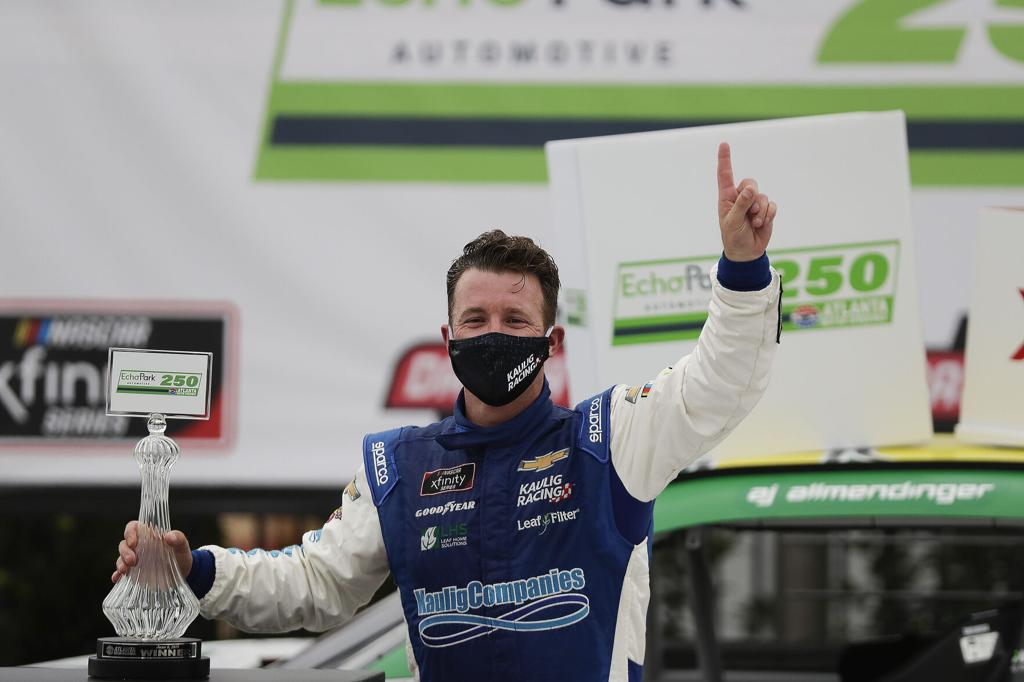 AJ Allmendinger will return to full-time racing in 2021 with Kaulig Racing.

Allmendinger had been running part-time for the team in the Xfinity Series. The move was announced on social media by the team with a video.

“As a part time driver for Kaulig Racing in the Xfinity series, I have really enjoyed working with all the women and men in the organization these past two years,” said Allmendinger. “The love of showing up to NASCAR races has returned for me, and I truly have enjoyed myself on and off the racetrack. It starts with Matt Kaulig and Chris Rice. I can’t thank them enough for giving me a call at the start of 2019 and offering me races that continued into 2020. More than anything, I have really loved being part of the team and watching the growth of the organization, and because of that, the opportunity to come back full time in 2021 was something I just could not pass up.”
“I am very grateful for Matt Kaulig, Chris Rice and everybody at Kaulig Racing for allowing this to happen,” continued Allmendinger. “I can’t wait to work with my son, Justin Haley, full-time and now Jeb Burton as well. I’m ready to go after a championship in 2021!”
Allmendinger will drive the No. 16 Chevrolet. Justin Haley drives the No. 11 car for Kauig and Jeb Burton was named recently as the driver of the No. 10 taking the spot of Ross Chastain who moved up to the Cup Series to drive for Chip Ganassi Racing.
“Kaulig Racing has come such a long way in only a few short years,” said team owner, Matt Kaulig. “We started this team in 2016 and have made the playoffs every year. This year we stepped up even more, and had two cars in the playoffs with one in the Championship 4 at Phoenix. With AJ Allmendinger added to our stable, and three fantastic drivers, we will have an even better chance at the championship.”
Facebook
Twitter
Pinterest
WhatsApp
ReddIt
Digg
Previous articleCorey LaJoie to drive for Spire Motorsports
Next articleBiohaven’s Nurtec ODT Partners with the Rick Ware Racing Team in the 2021 NASCAR Cup Series

Noah Gragson held off Ty Gibbs in the closing laps of Saturday's running of the Explore The Pocono Mountains...
NASCAR Xfinity Series

Bayley Currey has picked up a new sponsor for five events on the NASCAR Xfinity Series schedule starting with...