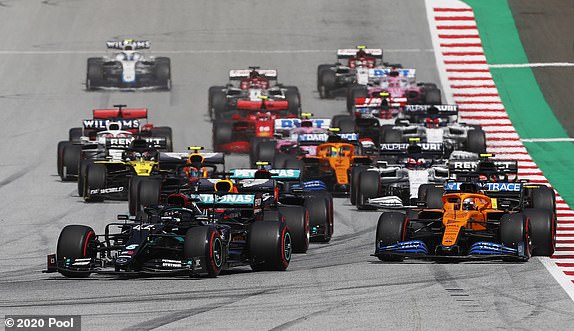 Beginning the race on the pole, Hamilton was not challenged in the race and spent the event pulling away from second place Max Verstappen.

The start of the race was problematic fro the Ferrari team as Sebastian Vettel and Charles Leclec collided ending their day.

Esteben Ocon retired on lap 26 with smoke coming from his front brakes. Hamilton would turn over the lead to Valtteri Bottas when he pitted on lap 28 holding it for six laps until he made his pit stop.

On the last lap Lando Norris was able to move up to fifth place passing three cars. Carlos Sainz was scored with the fastest lap of the race.

On Wednesday Williams Racing announced that driver Alex Albon would return for the 2023 season and beyond. Albon joined the...
f1

Max Verstappen began Sunday on the pole and was unchallenged for 71 laps in winning the Austrian Gran Prix. Lando...
f1

Max Verstappen started on the pole and led all 71 laps in Sunday's F1 race at the Red Bull...