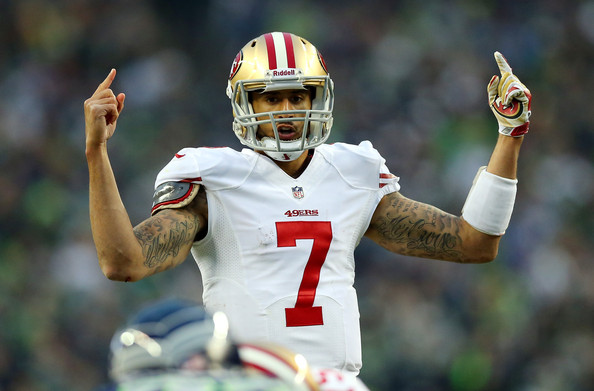 Truer and more obvious words could not have been spoken.

Kaepernick is entering the final year of his contract and will make $1.073 million this season, less thank backup Blaine Gabbert who will make $2.011 million.

There has been some blips about the 49ers and contract talks with Kaepernick but there does not appear to be a lot of actually dealings thus far.

“Those things have a process that play out.,” Harbaugh said Monday at the NFL owners meetings, via CSN Bay Area. “The priority is Colin Kaepernick is a San Francisco 49er for however long we can have him be a San Francisco 49er. It’s definitely a high priority.”

Last season Kaepernick took over the reigns for his first full season. After a slow start he responded with 3,197 yards passing with 21 touchdowns to eight interceptions. He added another 524 yards on the ground.

“Amazing individual. Amazing player,” is what Harbaugh said about his signal caller. “He shows up and works all the time. There’s really nobody to compete with him in a workout situation. He will bury everybody. And then when somebody tries to compete with him, he just ramps his competitiveness up and somebody’s over there on a knee throwing up.”

“He’s unbelievable. As you can tell, I think he’s a special and great player. So it’s a high priority.”

Of course a better measure could be the upcoming talks between the Seattle Seahawks and their quarterback Russell Wilson.