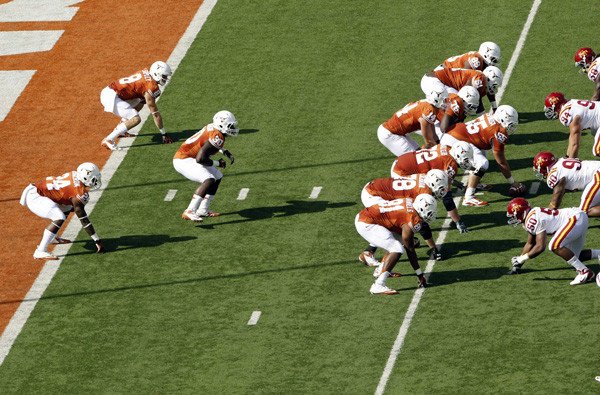 Lining up in the wishbone formation on their first play the Texas Longhorns honored the memory of former coach Darrell Royal. The Longhorns then smashed an inferior opponent defeating Iowa State 33-7.

Quarterback David Ash propelled the offense throwing for 364 yards and two touchdowns, completing 25-of-31 attempts. Eight of Ash’s passes found the hands of Jaxson Shipley for 137 yards while Mike Davis caught seven passes for 113 yards and a touchdown. The ground game was also in full force as the Longhorns ran for 221 yards.

“Bless his heart. We miss him,” said Texas coach Mack Brown, who was very close to Royal and said he “sat on the floor and cried” when he learned Royal had passed.

Under Royal the Longhorns won two national champions, a share of a third and 11 Southwest Conference titles from 1957 to 1976, he passed away Wednesday at age 88.

Brown played tribute to Royal by lining up in the wishbone formation to start the game. Texas then completed a pitch-back for 47 yards.

“Maybe we had a little intervention from up above on that one,” Brown said.

Texas racked up 609 yards of offense and held the ball for nearly 40 minutes. The Longhorns pounded out 222 yards on the ground.

Steele Jantz passed for 133 yards and a touchdown for the Cyclones (5-5, 2-5) but was under constant pressure from the Texas pass rush and threw two interceptions.