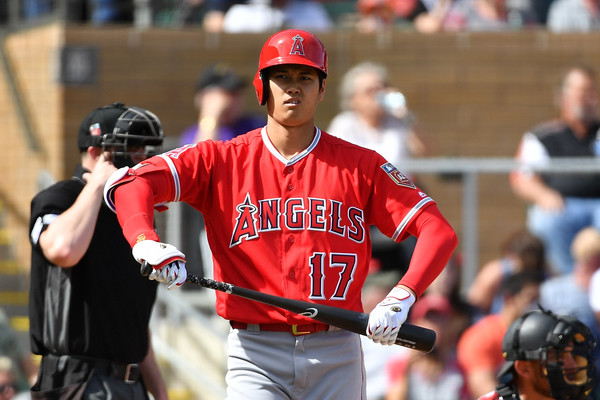 HomeNewsIs it too early to worry about Shohei Ohtani's arm and bat?
News

Is it too early to worry about Shohei Ohtani’s arm and bat?

Will the Angels really use Shohei Ohtani as a two-way player during the 2018 season?

As the days of spring training tick along, we are no further to knowing where Mike Scioscia plans to write Ohtani’s name throughout the 162 game regular season.

After so many articles were typed about Ohtani being a two-way player this year, now it is fair to wonder how long the Angels can entertain that idea. Is it possible the Angels start the 2018 season without Ohtani on the roster or could he even be sent to the minors if he gets off to a slow start?

Concerns with his bat?

Scouts have questioned if Ohtani can hit off of major league arms. Thus far his spring numbers have not been favorable and some have even suggested that big league arms will “punish him with inside fastballs” as “swing contains flaws in balance and mechanics” according to a recent Yahoo Sports article by Jeff Passan.

Maybe a full season in the minors could get Ohtani needed time in the batters box to make him a capable big league hitter. The problem is that the hype around Ohtani makes it difficult for the Angels to bury him in the minors.

Problems with his arm?

Perhaps of bigger concern is how Ohtani is doing on the mound. The Angels have resorted to hiding Ohtani in B-games this spring. On Friday, Ohtani gave up six runs in a three-inning start against the Mexican League’s Tijuana Toros.

Scheduled to go four innings or 60 itches, he reached 64 in just three while allowing five hits, striking out six and walking one.

Earlier this spring Ohtani said he would have to adjust to the ball and the mound in the United States. Following the outing on Friday Ohtani saw some positives from his performance.

“I felt like I made a lot of good pitches and quite a few bad ones,” Ohtani said through his interpreter, according to the Orange County Register. “The good thing I got out of this outing was pitching with runners on base, out of the stretch.”

For what it is worth, catcher Rene Rivera believes that Ohtani still has what it takes to succeed in the majors.

“I’ll tell you something, once the lights come on, it’s a different ballgame,” Rivera said. “It’s tough to pitch here. There are no fans. Don’t get me wrong, they’re [Tijuana] a good team, but they’re not a big league team. The adrenaline is not there. Once the lights come on and they say, ‘Play ball,’ you’ll see something different. More velocity, sharper pitches. It’s going to be Ohtani. You have to give it time.”