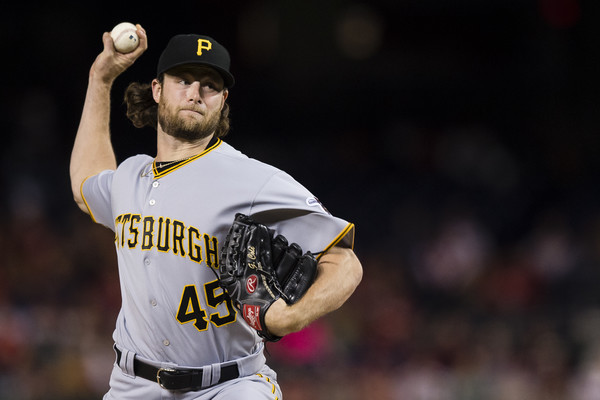 Days ago it was repoted that the Astros were acquring pitcher Gerrit Cole from the Padres. The report was later refuted and days went by before anything else was heard.

Then suddenly on Saturday it was announced that Cole was in fact being traded to the Astros in a five player deal. So to recap…. after long weeks of agonizing rumors, Gerrit Cole is a Pirate no more.

The official trade is Cole heading to the Astros in exchange for Colin, Joe Musgrove, Michael Feliz and Jason Martin.

The Astros will control Cole for the 2018 and 2019 season before he can hit free agency. With Dallas Keuchel hitting free agency after the 2018 season, Astros owner Jim Crane made no secrets that the team would seek out starting pitchers this winter. The Astros were able to acquire Justin Verlander last season minutes before the trade deadline passed.

The players the Pirates got in return for Cole is a bit underwhelming.

Feliz, 24, has a 5.13 ERA for his career working out of the bullpen while Musgrove, 25, was nothing more than a swingman in the Astros system.

Moran, 25, had strong numbers at Triple-A last season but that came in the hitter friendly Pacific Coast League.How his 18 homers in 338 at-bats will translate to the major leagues remains to be seen. He’s had a brief cup of coffee with the Astros in each of the last two seasons.

The youngest player is Martin who at age 22 split time between High-A and Double-A. He was left unprotected in the Rule 5 draft last month meaning anyone could have claimed him there for the cost of keeping him on their roster.