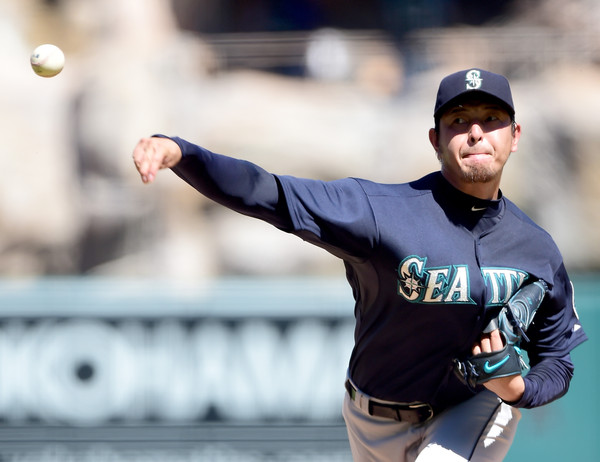 Dodgers backing out of deal with Japanese pitcher Hisashi Iwakuma

Viewed as a replacement for Zack Greinke, the Los Angeles Dodgers are now backing away from a signing of Japanese born pitcher Hisashi Iwakuma.

Nearly two weeks ago the Dodgers and Iwakuma stuck what was a three year deal worth $45 million but there has not been any word about it since. And now apparently the whole deal has fallen apart according to Jiji Press in Japan.

Other Options? Dodgers in on Kazmir and Leake

Thus far no one from the Dodgers have confirmed the report but this would hardly be the first time something like this has happened during free agency. In recent years the Boston Red Sox backed out of a deal with Mike Napoli, signing him to a lesser deal while the Baltimore Orioles completely passed on a deal with reliever Grant Balfour.

“Inaccurate” to say #Dodgers are out on Iwakuma, I’m told. Perhaps they’re reworking the contract?

Dylan Hernandez who follows the Dodgers for the LA Times reports that the deal may end up being reworked. Could the Dodgers get him to lower his price or can he find a deal elsewhere?

A strained lat caused Iwakuma to miss May and June but he returned for the second half pitching well. He finished the season with a 3.54 ERA and nine wins in 20 starts for a bad Seattle Mariners team.

Given that Iwakuma appeared healthy at the end of the season and has four years of stats which would place him near the top of most teams rotations it is hard to imagine he would go without a deal for too long if the Dodgers do pass on him.