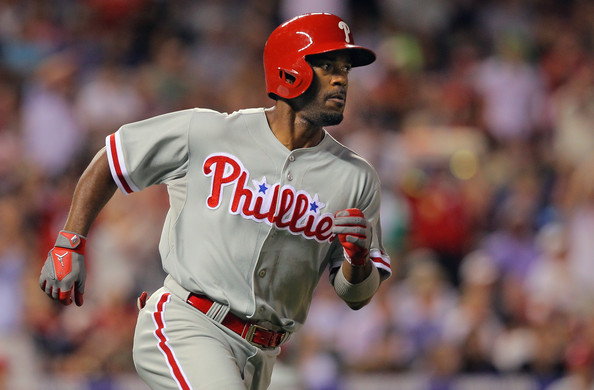 HomeNewsJimmy Rollins will play in season-opener against Rangers
News

Jimmy Rollins will play in season-opener against Rangers

Philadelphia Phillies shortstop Jimmy Rollins will be in the lineup for Monday’s season-opener against the Texas Rangers.

There was some minor concern that the 35-year-old could miss Monday’s game as his wife was giving birth to their second child.

Instead Rollins was simply late arriving to Arlington and will bat second for the Phillies.

Rollins will be looking to improve on his .252/.318/.348 line last season that aw him score just 65 times and steal 22 bases across 160 games. If his spring numbers are any indication it could be a rough season for the former All-Star.

The Phillies and Rangers have a 2:05 pm ET start time.

Eric Young Jr. will start in his place on Monday but Murphy is expected to be back in time for the Mets second game of the season. Juan Lagares will get the call for the Mets in center field.

Murphy and wife Tori Ahern got married in December 2012, and this is the couple’s first child.