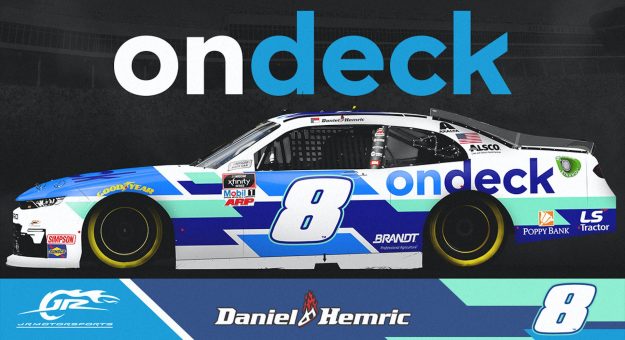 OnDeck, the leader in online lending to small business, today announced its sponsorship of the No. 8 Chevrolet for JR Motorsports and driver Daniel Hemric in two races during the 2020 NASCAR Xfinity Series season.  The primary sponsorship of Hemric, the 2019 NASCAR Cup Series Rookie of the Year, and JRM marks OnDeck’s initial involvement in NASCAR.

By partnering with JRM and the No. 8 team, OnDeck is joining with one of the most successful organizations in NXS competition. Based in Mooresville, N.C.,  JRM holds 47 victories and three championships since entering NXS competition in 2005. The organization is co-owned by NASCAR on NBC analyst and 15-time winner of NASCAR’s Most Popular Driver Award Dale Earnhardt Jr., sister Kelley Earnhardt Miller, and NASCAR Hall of Fame member Rick Hendrick.

OnDeck’s sponsorship begins on Saturday, March 14, when Hemric and the rest of the NXS compete in the Atlanta 250 at Atlanta Motor Speedway. Hemric will again race with OnDeck colors on June 20 at the Chicagoland Speedway.

“OnDeck is proud to sponsor the JR Motorsports team and driver Daniel Hemric for races during the 2020 NASCAR Xfinity Series season,” said Shannon Smith, senior vice president of marketing, OnDeck. “So many of our small business customers are avid motorsports fans and we look forward to joining them to cheer on Daniel and the No. 8 car decked out in OnDeck colors at the Atlanta 250 and the Chicago 300. ”

“I can’t wait to get to Atlanta with OnDeck coming onboard our No. 8 Chevrolet,” said Daniel Hemric. “It’s awesome to see a new company like OnDeck come into the world of NASCAR and I couldn’t be happier that they have allowed me to be the one that gets to represent them at both Atlanta and later this year in Chicago with our JR Motorsports Camaro. It’s great to see them using a platform like NASCAR to help get their messaging across. Hopefully they’ll have a great time and we can come away with a couple of victories for them.” 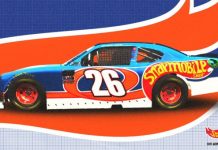