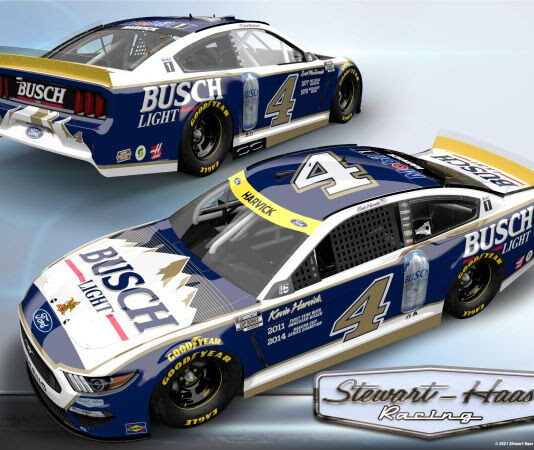 Kevin Harvick is running a fan-inspired paint scheme in the Cook Out Southern 500 NASCAR Cup Series race Sunday night at Darlington (S.C.) Raceway. Scott MacDonald, a NASCAR fan since 1977 who witnessed Busch’s entry into NASCAR when the brand sponsored driver Cale Yarborough in 1979, was chosen by Busch to influence the design of Harvick’s No. 4 Busch Light Ford Mustang. MacDonald has been a Harvick fan since 2007 when he watched him win the Daytona 500 by just .020 of a second over Mark Martin. MacDonald caught the racing bug as a 6-year-old growing up in Haddonfield, New Jersey. He became a regular visitor to his two nearest Cup Series venues – Dover (Del.) International Speedway and Pocono (Pa.) Raceway – and has since been a part of the NASCAR Fan Council.

“To have the opportunity to design a car for a driver like Kevin Harvick is a dream come true,” MacDonald said. “Plus, to have it run at the Southern 500 – a crown-jewel race – I can’t stop smiling. Stewart-Haas Racing and Anheuser-Busch have given me the opportunity to become a part of NASCAR history. Nothing can compare to that! When anyone watches this race again, they’ll see my design, especially when Kevin wins!”

When the 50-year-old MacDonald was asked which will be more satisfying – seeing the car he inspired out on the racetrack or bragging to his friends and co-workers that he was behind the look of Harvick’s Busch Light Ford, MacDonald said, “Oh, I’ve already started bragging, but I think when I see that car out on the racetrack, that will definitely be more satisfying.”