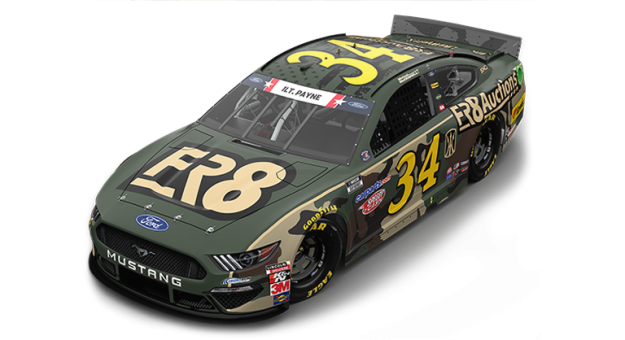 Fr8 Auctions will honor a true Georgia hero this Memorial Day weekend at the Charlotte (N.C.) Motor Speedway during the running of the Coca-Cola 600. The No. 34 Fr8 Auctions Ford Mustang will race in the honor of First Lieutenant Howard David Payne III.

Payne was a member of the United States Army who made the ultimate sacrifice during service in the Vietnam War. Payne, who was from DeKalb County, was awarded many different commendations, including the Purple Heart for his service.

Fr8 Auctions, based in Lithia Springs, Ga., will turn the No. 34 Ford Mustang camouflage this weekend with the 11th Light Infantry Brigade insignia on the side of the car. Payne served as the leader of the 59th Infantry Platoon Scout Dog, or 59th IPSD, whose mission was to provide support to units of the 11th Brigade as they fought the Viet Cong and the North Vietnamese Army.

Payne succumbed after an ambush while detecting enemy strongholds. His body was returned to Georgia and Payne is now forever remembered for his heroic duties on the Vietnam Veteran’s Memorial in Washington, D.C.

“We’re thankful to Front Row Motorsports and NASCAR for allowing us to honor a military hero from Georgia,” said Marcus Barela, Owner, Fr8 Auctions. “The Coca-Cola 600 on Memorial Day is a great race, but most importantly, this Memorial Day weekend is about remembering those who have made America so great. Freedom isn’t free and it’s because of families such as the Payne’s that we can enjoy this race with family and friends. We’re proud of this car and proud to have Michael behind the wheel this weekend.”

“I’ve always felt that it’s a blessing to race and it’s because of the freedoms we have,” added McDowell. “But, we’ve had so many people who have paid the ultimate price for our freedoms. We’re lucky at Front Row Motorsports to have partners such as Marcus and everyone at Fr8 Auctions who want to remember and acknowledge our heroes. So, for us, this weekend will be about remembering First Lieutenant Payne and all the men and women who have and continue to serve for our country.”

For more information about the Be Your Own Hero Foundation #BraveLikeWyatt, visit www.bravelikewyatt.com.

Ty Dillon driving No. 6 for JD Motorsports at Road America

An Overview of Slot Payout Percentages

Larson on Sonoma pole, lineup for Toyota Save Mart 350