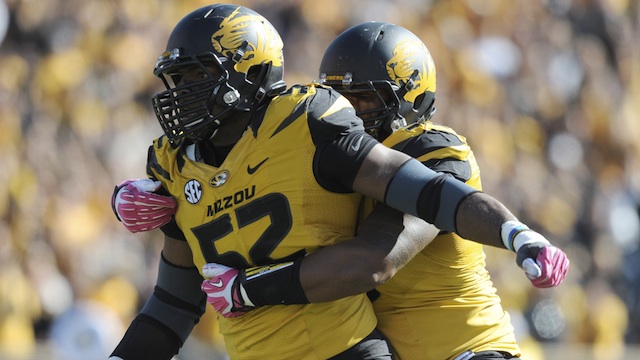 Michael Sam, a first-team All-American who played at Missouri, has announced that he is gay.

Sam spoke to ESPN’s Outside the Lines stating that he was gay and that his teammates at Missouri had known since August.

“I understand how big this is,” he said. “It’s a big deal. No one has done this before. And it’s kind of a nervous process, but I know what I want to be … I want to be a football player in the NFL.”

Sam will be in the 2014 NFL Draft and wanted to make sure he got to tell his story.

“I didn’t realize how many people actually knew, and I was afraid that someone would tell or leak something out about me,” he said. “I want to own my truth. … No one else should tell my story but me.”

“Coaches just wanted to know a little about ourselves, our majors, where we’re from, and something that no one knows about you,” Sam said. “And I used that opportunity just to tell them that I was gay. And their reaction was like, ‘Michael Sam finally told us.’ ”

“I knew from a young age that I was attracted to guys,” he said, “I didn’t know if it was a phase … I didn’t want to say, ‘Hey, I might be gay. I might be bi.’ I just didn’t know … I wanted to find who I was and make sure I knew what was comfortable. So I didn’t tell anyone growing up.”

GMs and experienced personnel men I spoke with say they were either aware Michael Sam is gay or heard scouts talking about it.

“If you led the SEC with 11.5 sacks and 19 tackles for losses?” he said, laughing. “If a gay person did that, I wouldn’t call that person weak.”

“I’m not afraid to tell the world who I am. I’m Michael Sam: I’m a college graduate. I’m African American, and I’m gay,” he said. “I’m comfortable in my skin.”

Sam has been projected as a fourth to seventh round pick by my analysts. Mortensen has him as a third to fifth round selection.