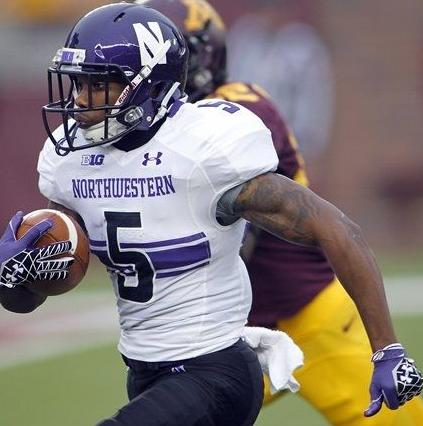 Venric Mack rushed for 182 yards for the Wildcats of Northwestern and was untouched on his way to scoring plays of 26 and 48 yards. The big day on the ground helped alleviate any need of a passing game. Kain Colter was 10 for 10, but for just 63 yards. Trevor Siemian, Northwestern’s passing quarterback, was 1 for 7 for 4 yards.

One of the highlights from the game came in the second quarter on a 2nd & 5 play from Minnesota’s 46-yard line.

Minnesota tailback Donnell Kirkwood lost his helmet decal following a hit from a Northwestern Wildcats defender.  Judging from a piece of the decal still being on the helmet we have to wonder if perhaps the defenders face mask scrapped the decal off.

The Wildcats will host Nebraska next week while Minnesota will go to Wisconsin next week. Video from ESPN YouTube.