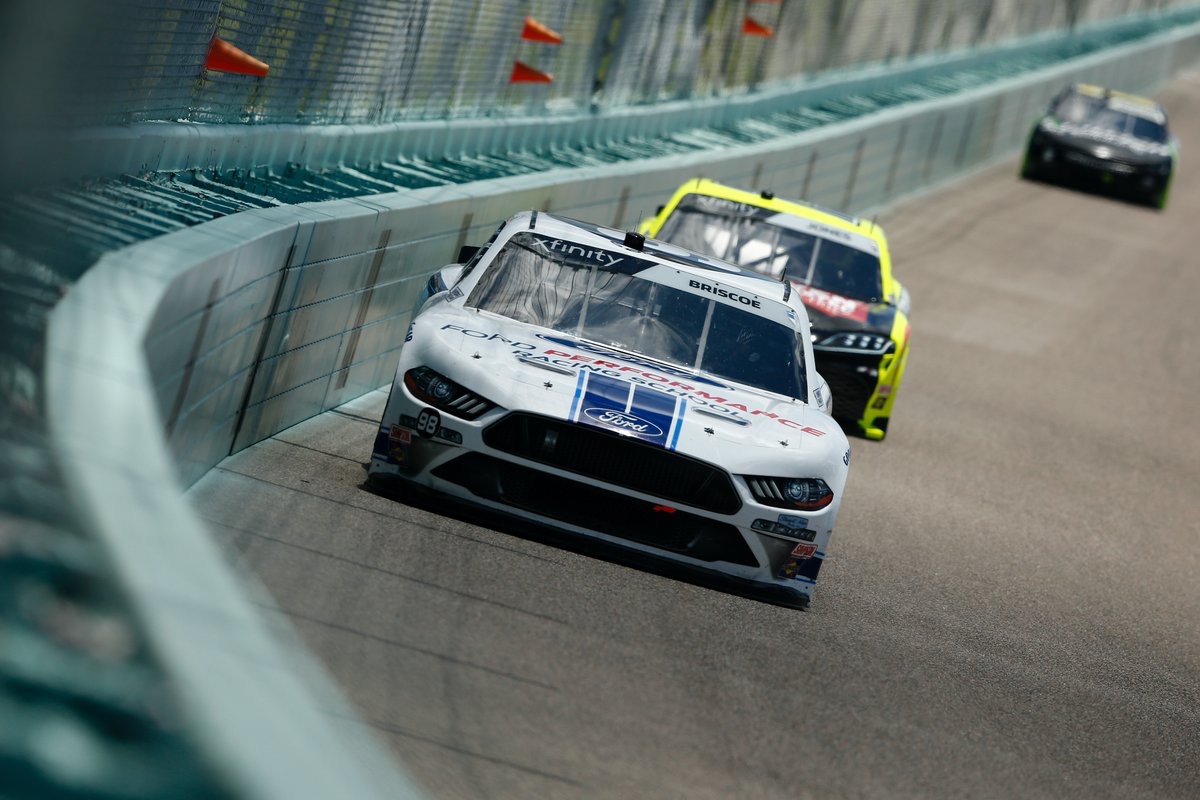 Chase Briscoe’s car came to life late as he claimed the checkered flag in the Contender Boats 250 at Homestead-Miami Speedway.

The starting lineup was determined by the finishing order from Saturday’s race with the top 15 being inverted which placed Myatt Snider the front of the field and Hooters 250 winner Harrison Burton in 15th.

Daniel Hemric who took over the No. 8 after Dale Earnhardt Jr. races the car yesterday as well as drivers who needed to go to backup cars or have adjustments including Noah Gragson, Justin Allgaier and AJ Allmendinger all went to the back of the field to start the race.

On lap 9 Chase Briscoe, who had Greg Zipadelli on the out box following penalties on Saturday, passed Ross Chastain for the race lead. Austin Cindric assumes the top spot two laps later and hold it until the completion caution on lap 20. Gragson had moved up to sixth prior to the caution with Allgaier and Hemric not far behind. Caesar Bacarella and Tommy Joe Martins would bring out the second caution of the race when they spun. Ryan Sieg would get around Cindric to claim the first stage of the race.

Sieg would place on old tires and have issues on pit road on the ensuing pit stop while Gragson would go to the front of the field on lap 68 and hold it until the stage came to an end. For Sieg the gamble went wrong and he found himself off the lead lap and out of contention.

Cindric would take the lead from Gragson shortly after the start of the third stage but as the green flag run went along Gragson would reassume they lead as Cindric had a tire issue and was forced to pit. Following flag pit stops Gragson reclaimed the lead from Cindric who had pitted 12 laps earlier. Contact with the wall would negatively impact Justin Allgaier and Saturday’s winner Harrison Burton late in the race.

Gragson once had a four second lead but it would be cut to less than one with four to go before Briscoe made contact with the wall. Before Gragson could get the white flag Cindric would spin out bringing out a caution. Briscoe would beat Gragson out the pits as the race headed to overtime. A crash involving Daniel Hemric, Michael Annett and Riley Herbst which occurred after contact from Allmendinger would bring out a caution and set up another green white checkered and allow Burton back on the lead lap.

Briscoe was able to hold off Brandon Jones on the final restart to win the Contender Boats 250.

The extra Xfinity Series race at Homestead which produced this doubleheader came at the expense of Iowa Speedway which will not have a race this season.