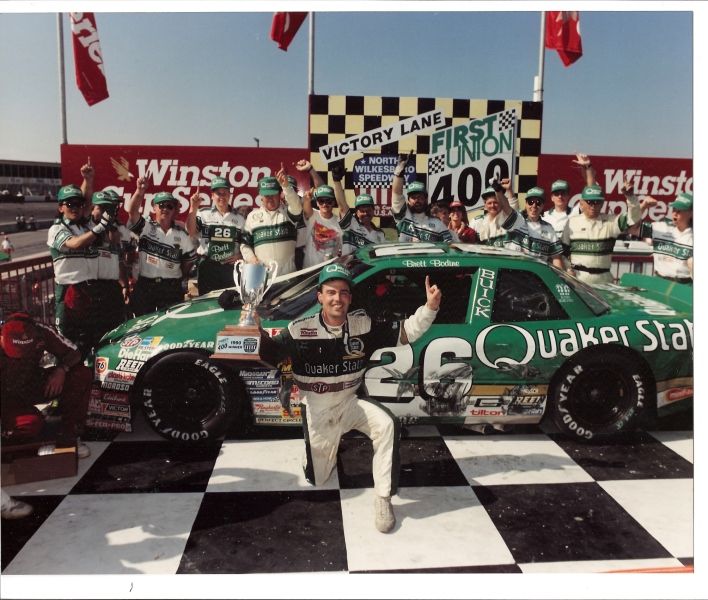 The year was 1990. It was a different time. Brett Bodine would run 480 NASCAR Cup Series events between 1986-2003 but it was April 22 of that year that saw the driver take his lone trip to victory lane, albeit not without controversy.

Bodine led 146 of the 400 laps on the day claiming the checkered flag ahead of Darrell Waltrip and Dale Earnhart but the No. 26 car should not have been credited with the race win.

Bodine pitted early between green flag pit stops from laps 280 thru 318. Kenny Wallace would bring out a caution on lap 321 after a spin. As the pace car pulled onto the track to pick up the race leader he did so in front of Earnhardt and not Bodine.

NASCAR would run 17 laps of caution trying to sort out who was the leader eventually telling Eanhardt and Waltrip to get behind Bodine, who in the time between the caution and the decision was able to make a pit stop and get new tires.

With a good car and newer tires, Bodine would lead the final 62 laps under green claiming the checkered flag.

“It’s an unbelievable feeling,” Bodine said according to the Charlotte Observer a day later. “I didn’t think it would take this long and I got impatient. … Now I can say I know I can beat them ’cause I did it once before.”

“I walk over to Bill and I’m almost on my knees,” Waltrip said. “Bill, he did not win this race and everybody in this garage area knows that.’ And Mr. France in his divine wisdom, took his cigarette out of his mouth, put his arm around me and he said, ‘DW, leave that boy alone. That’s the first race he’s ever won and you’re going to win a lot more races.”

Waltrip would fail to win in 1990, his first full-time season without a victory.

“We messed up,” said Chip Williams, NASCAR’s public relations director.  “By throwing the caution on the second-place car, it kept Bodine in the lead lap. He slipped into the pits and came out without losing the lead because the pace car was keeping the second-place car back. We messed up by picking up the wrong car. It was a judgment call, and you can’t overrule a judgment call.”