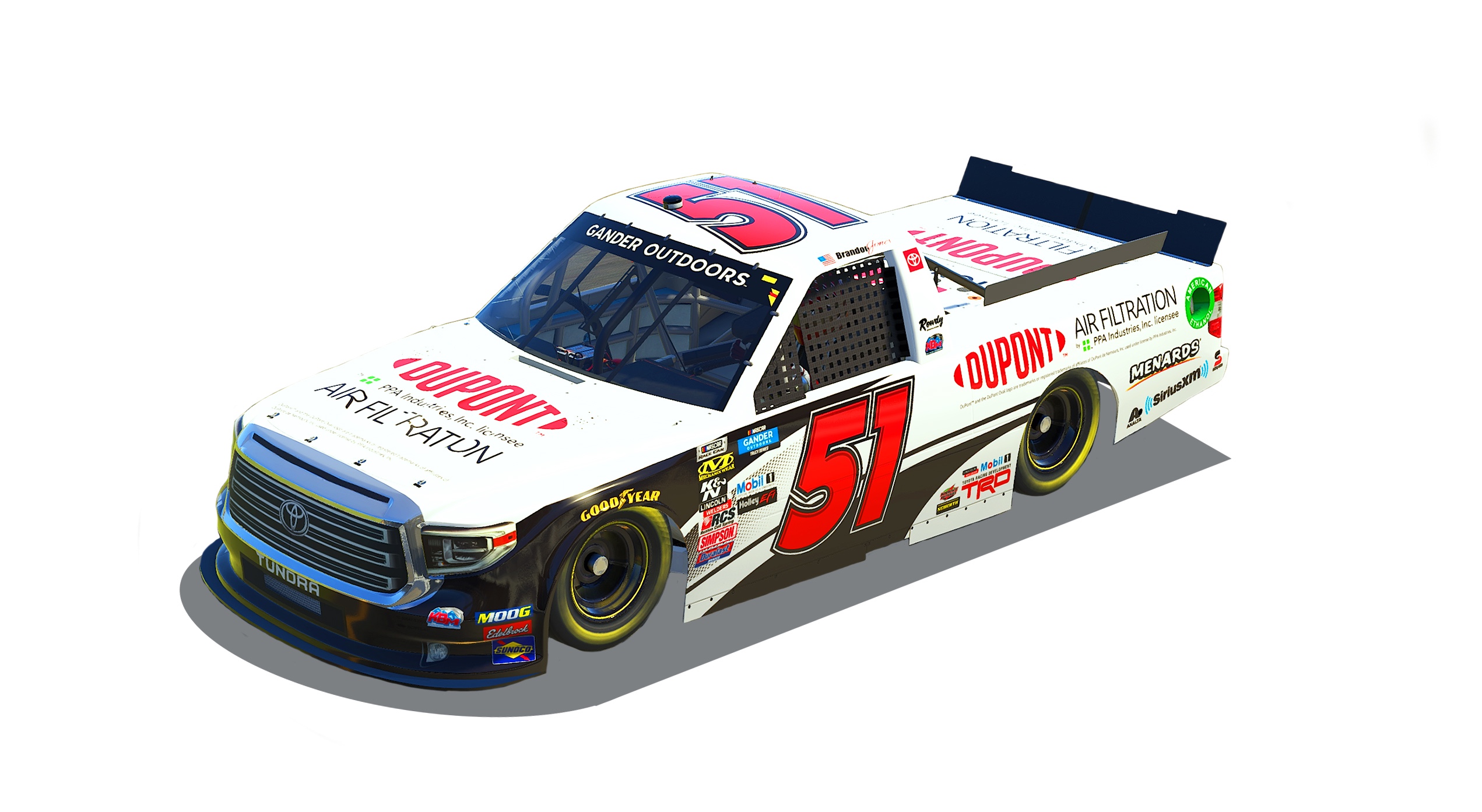 Brandon Jones will get back behind the wheel of the No. 51 DuPont Air Filtration/Menards Tundra for the penultimate race of the 2019 NASCAR Gander Outdoors Truck Series season. Jones will be trying to help the No. 51 team advance to the Championship 4 in the owner’s portion of the Gander Trucks playoffs. The No. 51 team enters the final event in the Round of 6 third in the owner’s standings, 20 points above the cutoff line for advancing the championship race next Friday night at Homestead-Miami (Fla.) Speedway. Jones will be the third different driver to pilot the No. 51 in this round, Riley Herbst finished third in the opening race of the round at Talladega (Ala.) Superspeedway and in the second race Christian Eckes was in the top-five and battling for a win as the field took the white flag at Martinsville (Va.) Speedway, but a last lap incident relegated him to a 17th-place finish.
Jones will be making his fifth and final Gander Truck Series start for Kyle Busch Motorsports (KBM) this season. He has two-top five finishes across his four starts for KBM this season, including a runner-up finish at Chicagoland Speedway in Joliet, Ill., in June. Most recently, Jones piloted the No. 51 at Kentucky Speedway in July, where he was leading late in Stage Two when he got collected in a wreck and finished 23rd. The Georgia native also made five starts for KBM in 2018, collecting two top-five and four top-10 finishes. Overall since making his Gander Trucks debut in August of 2013, Jones has recorded four runner-up, 12 top-five and 21 top-10 finishes across 44 Gander Truck Series starts.
The 22-year-old driver has two truck series starts at ISM Raceway in Avondale, Ariz., with an average starting position of 11.5 and an average finishing position of 22.0. His best result was a 12th-place finish in the 2014 event. In the NASCAR Xfinity Series, Jones has seven starts and two top-10 finishes with an average finish of 12.0. He has finished seventh in each of his last two Xfinity Series starts at the Arizona track.
Jones, a NASCAR Xfinity Series regular, will be pulling double duty this weekend, also competing in Saturday’s race for Joe Gibbs Racing. He has compiled one win, six top-five and 15 top-10 finishes across 31 NXS starts this season. He picked up the first victory of his NASCAR Xfinity Series career at Kansas Speedway in Kansas City last month.
Veteran crew chief Rudy Fugle leads the No. 51 team this season. Fugle has guided his team to four Owner’s Championships (2013, 2015, 2016 and 2017) as a crew chief at KBM, including combined Owner’s/Driver’s Championships with Erik Jones in 2015 and Christopher Bell in 2017. The New York native’s drivers have combined for 28 wins, 23 poles, 69 top-five and 105 top-10 finishes across his 134 races calling the shots for the organization. At ISM Raceway, Fugle’s drivers have recorded six starts, with one win in 2013 by Erik Jones, two top-five and four top-10 finishes resulting in an average finish of 12.8. Fugle has led the pole winning effort for the last four Truck Series races at ISM Raceway and his driver has led 40 or more laps in each of the last five races.
PPA Industries, Inc. is headquartered in Hickory, N.C. and distributes residential air and water filtration throughout North America. Included in the PPA Industries portfolios are a wide range of DuPont branded products. The two companies teamed up to bring new ingredient technologies to water and air filtration that help optimize filter life and improve overall filter performance.