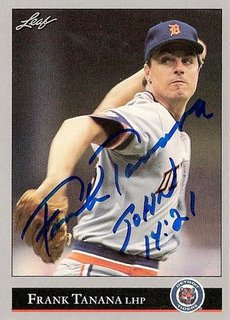 Frank Tanana went from a brash nineteen year old with a brash cocky attitude and a 100 mile-per-hour fireball with the California Angels to a looping curve ball artist with the Detroit Tigers closely following the belief in Jesus Christ. In all Tanana won 240 games, marking the highest total for a player that never won 20 in any single season. Three times he appeared in the all star game and was more consistent then spectacular.

Tanana is never going to see Cooperstown; he never made it to the World Series and only twice appeared in the playoffs. His career really was just consistent with brief streaks of excellence. Tanana’s was considered by all to be a great teammate and a leader in the club house for some bad Tiger teams.

A three time All-Star, Frank Tanana went from throwing 100 miles-per-hour to using a looping curveball following an injury in just his sixth year in the majors. In 1971 the Anaheim Angels made Tanana the first selection in the amateur draft. The long haired cocky and arrogant Tanana went on to win the 1973 AL Rookie of the Year award. At the age of 25, Tanana began to commit his life to Jesus Christ even singing the Bible verse ‘John 14:6’ along with his autograph and later ‘John 14:21’.

When Minnie Minoso came out of retirement in 1976 the first pitcher he faced in his return was Frank. That September 11th night Tanana help the 53 year old hitless. Perhaps Tananas best season came in 1977 he led the AL in ERA (2.54) and shutouts (7). He fanned 205 in 241 1/3 innings and completed 20 games. His record was 15-9 for the 5th place Halos. At one point in the middle of the season he had completed 14 straight games firing the last on his birthday July 3. The stress of throwing the heater and the number of innings he did would catch up with Tanana later in his career.

Frank picked up the win in the division clincher for the California Angels in 1979, defeating the Royals.

Frank was on the mound for the final day of the 1987 season. The Tigers had won their previous six and a win over the Blue Jays would give them the division. Frank pitched brilliantly and shut out the Blue Jays 1-0 sending the Tigers into the playoffs. It wasn’t meant to be though and the Tigers were defeated by the Twins in the ALCS.

Perhaps the biggest blemish on Frank’s record is that he never got past the fifth inning in either of his post season appearances, thus never making it to the World Series.

When Frank retired after 1993 he had played for six teams and 21 seasons and currently is one of only 18 men to have 600 career starts. His 240 career wins are the most by a player to never of won 20 in a season, his season high was 19.