Derek Kraus and McAnally-Hilgemann Racing will turn back the clock for race fans to the early days of the NASCAR Gander RV & Outdoors Truck Series when they unload their 1996 Ron Hornaday Throwback entry at Darlington (S.C.) Raceway on Sunday.

The No. 19 NAPA Filters Toyota Tundra that Kraus will drive as part of the traditional Throwback Weekend at the historic track is a replica of the iconic NAPA-sponsored truck that NASCAR Hall of Fame member Ron Hornaday drove to the first of his four series championships 24 years ago.

The 1996 Ron Hornaday Throwback honors Hornaday for his induction into the NASCAR Hall of Fame in the class of 2018 and commemorates the first NASCAR championship for NAPA AUTO PARTS in 1996 with the No. 16 NAPA entry in the truck series. The throwback scheme also celebrates the 30-year partnership between NAPA AUTO PARTS and Bill McAnally Racing, from 1990 to 2020.

“This is a great opportunity for us to honor Ron and commemorate NAPA’s first NASCAR championship,” said team owner Bill McAnally. “In addition, we are celebrating our 30th year with NAPA and BMR.

“I have a deep respect for what Ron accomplished in this sport,” McAnally added. “I know how hard he worked to succeed in racing and it was great to see him get the recognition by being inducted into the NASCAR Hall of Fame.”

Hornaday competed for Dale Earnhardt Inc., from 1995 to 1999 in what was then known as the NASCAR Craftsman Truck Series. The DEI entry became well recognized for its blue and gold NAPA color scheme between 1996 and 1999 – during which time Hornaday won series titles in 1996 and 1998.

“I was really surprised and honored to have Bill McAnally give me a call about running a throwback scheme at Darlington of the NAPA AUTO PARTS truck that I ran back in the day, in 1996,” Hornaday said. “NAPA came on board and I got that first championship.”

Hailing from Palmdale, Calif., Hornaday had won back-to-back championships in the NASCAR Southwest Tour in 1992 and 1993. He graduated to what was then known as the NASCAR Winston West Series, where he registered six wins in 45 starts from 1989 to 2001.

He also raced in the NASCAR XFINITY Series, where he garnered four wins in 184 starts. In addition, he competed in the NASCAR Cup Series – where he made 46 starts, with most of those coming in 2001.

Kraus, a rookie in the truck series who was born five years after Hornaday won the 1996 title, talked about what it means to him to be part of this tribute.

McAnally, meanwhile, explained BMR’s overall approach in doing a throwback of the NAPA truck from 1996.

“In recognizing Ron, we also wanted to celebrate NAPA’s first NASCAR championship,” McAnally said. “It was a great season for Ron, for DEI and for NAPA.”

Following the 1996 title, Hornaday and DEI won a second truck series championship with NAPA in 1998.

NAPA AUTO PARTS went on to win a NASCAR championship in the XFINITY Series in 2014 with Chase Elliott and JR Motorsports. At NASCAR’s Regional Level, NAPA received the Championship Sponsor Award in the NASCR K&N Pro Series West nine times with BMR. In other motorsports, meanwhile, NAPA won the 2016 Funny Car Championship with Ron Capps and the 2019 World of Outlaws Sprint Car Championship with Brad Sweet.

“With this throwback scheme we are also celebrating the 30th anniversary of BMR’s partnership with NAPA,” McAnally said. “I’ve been very fortunate to have that long-term partnership. I’m grateful to everybody at NAPA and to all the sponsors in the NAPA family who have been part of our racing program.”

Among his many accomplishments in the sport, the Bill McAnally-led team captured the Rookie of the Year title with NAPA in the NASCAR Truck Series in 2002. Through McAnally, NAPA has also been the entitlement sponsor on countless K&N West/ARCA West races over the years; as well as some K&N East races.

Throughout it all, McAnally looks upon the relationship between the team and their long-time sponsor as a partnership. It’s been successful on and off the track, as they have worked together to develop various ways to use the BMR program to market NAPA and its products. 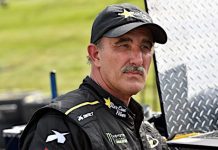 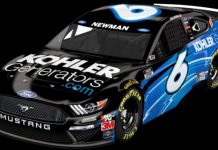