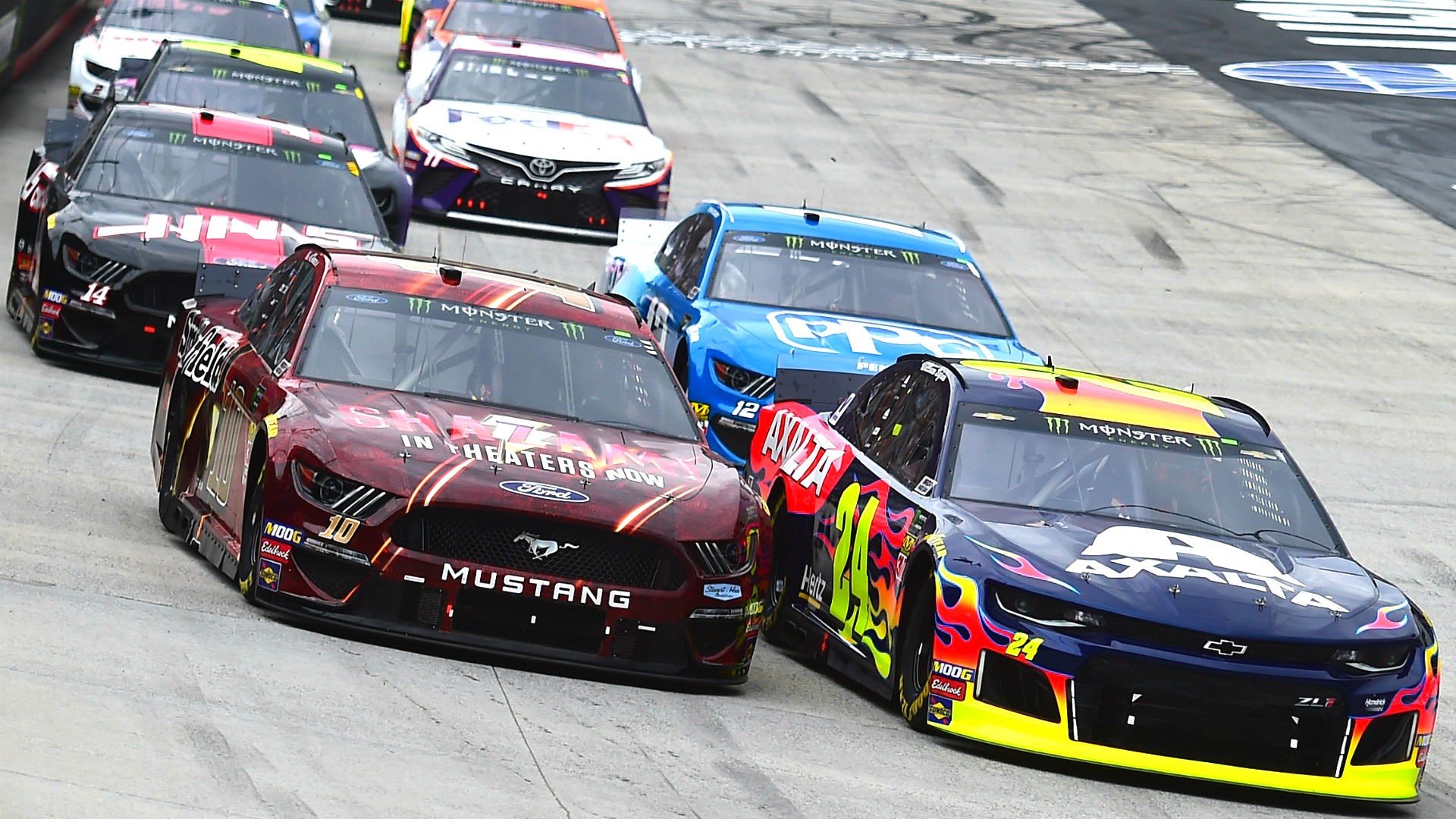 NASCAR is a type of car racing that could only appear in the US. Let alone the fact that its founders were, in fact, bored bootleggers, the idea of driving at top speeds for a few hours straight, risking your life every second, could only come up in the minds of people who produce insanely powerful, fast but clumsy gasoline devourers and rubber burners.

NASCAR drivers are considered real heroes for not only their loyal fan community but also all those hungry for real extreme action. Some of these legendary drivers even have songs written and movies shot about them. For example, Richard Petty and Dale Earnhardt went far beyond the U.S. borders. But today we decided to focus more on race cars that made legends become who they are. 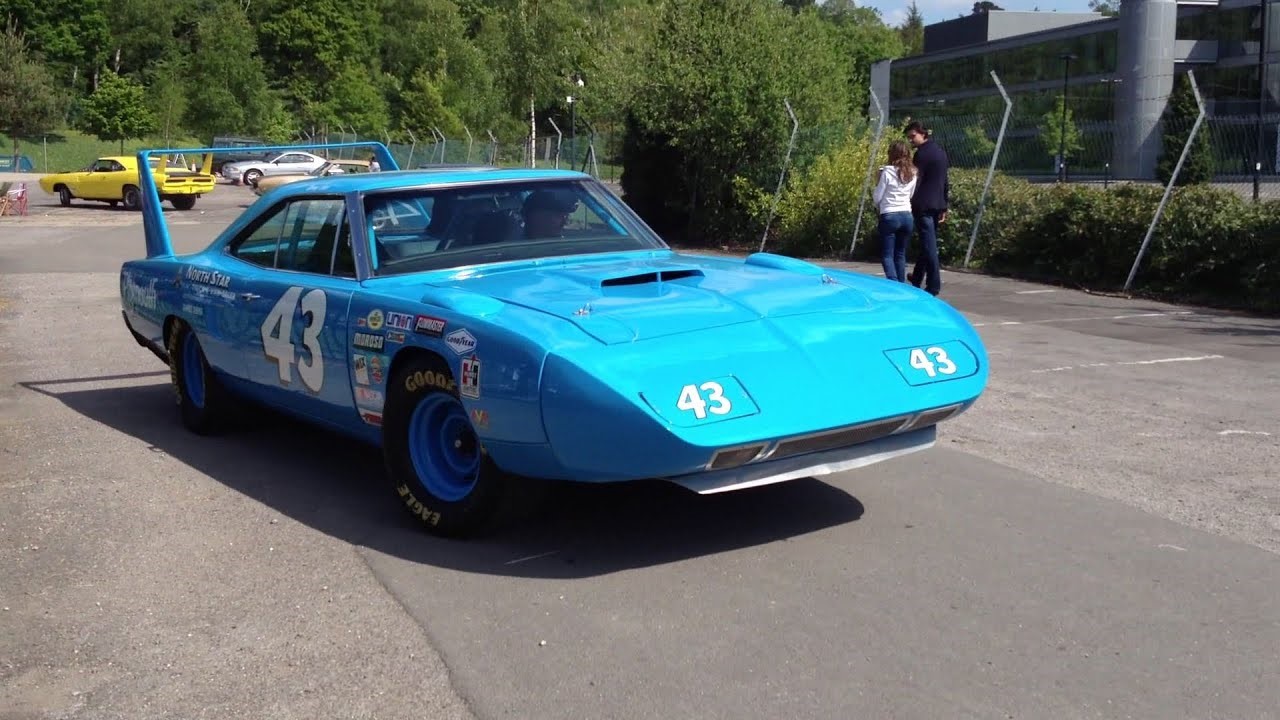 The 1970 Plymouth Superbird is a race car that was designed to dominate in NASCAR racing. The vehicle has been manufactured since 1970 by Plymouth. One of the most legendary race cars in NASCAR racing and its repeated winner, driven by the greatest NASCAR driver of all time, Richard Petty. Despite the fact that the Superbird was originally planned as an exclusive race model, it was also manufactured as a production car. 1920 cars were produced in total, which turns them into collector cars.

Externally, the Plymouth Superbird was almost identical to the Dodge Charger Daytona, and internally, to the Plymouth Road Runner. One of the most distinguishing features of the Superbird was its huge spoiler, which provided great downforce. And though it was only useful at speeds above 90 km/h, it still managed to capture public attention. By the way, this was the first time when spoilers were used in NASCAR. Before that, race car handling left much to be desired…

With Richard Petty behind the wheel, the highly-modified Plymouth Superbird has won a number of brilliant victories, forever writing its name in the history of world racing. However, the Superbird could not fully meet all the expectations and surpass its no less famous predecessor, Dodge Daytona.

It is believed that over 1,000 Plymouth SuperBirds exist today. 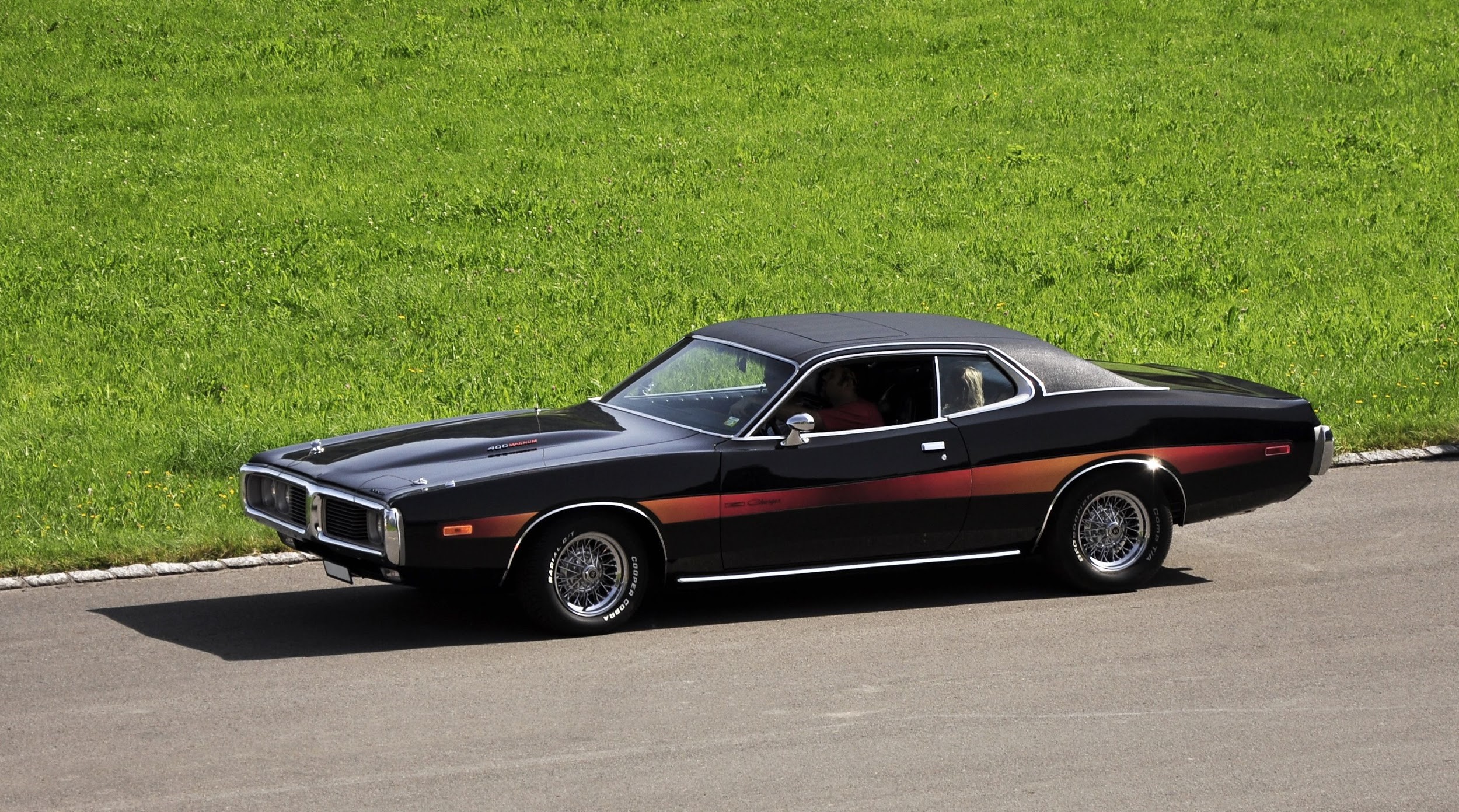 In the ’60s, Richard Petty became a NASCAR legend, partly, thanks to his Plymouth Superbird. However, his longest ride was on the blue/red STP Dodge Charger, namely, from 1972 to 1977. It was this third-generation Charger that won him seven Daytona 500 races (1973 and 1974), and finished second to David Pearson in 1976, after their spinning in the final lap. In addition, the Charger has also won three more Winston Cup championships (1972, 1974, and 1975).

After all these victories, Petty fans only wanted to see the driver on this Chrysler car. This may have influenced NASCAR extending the car’s eligibility through the whole 1977 race season, so they wouldn’t lose their main favorite. After this Dodge, Petty also tried to promote the 1978 Dodge Magnum, which happened to be too cumbersome to win a race. Thus, until his retirement in 1992, Petty was driving GM cars. 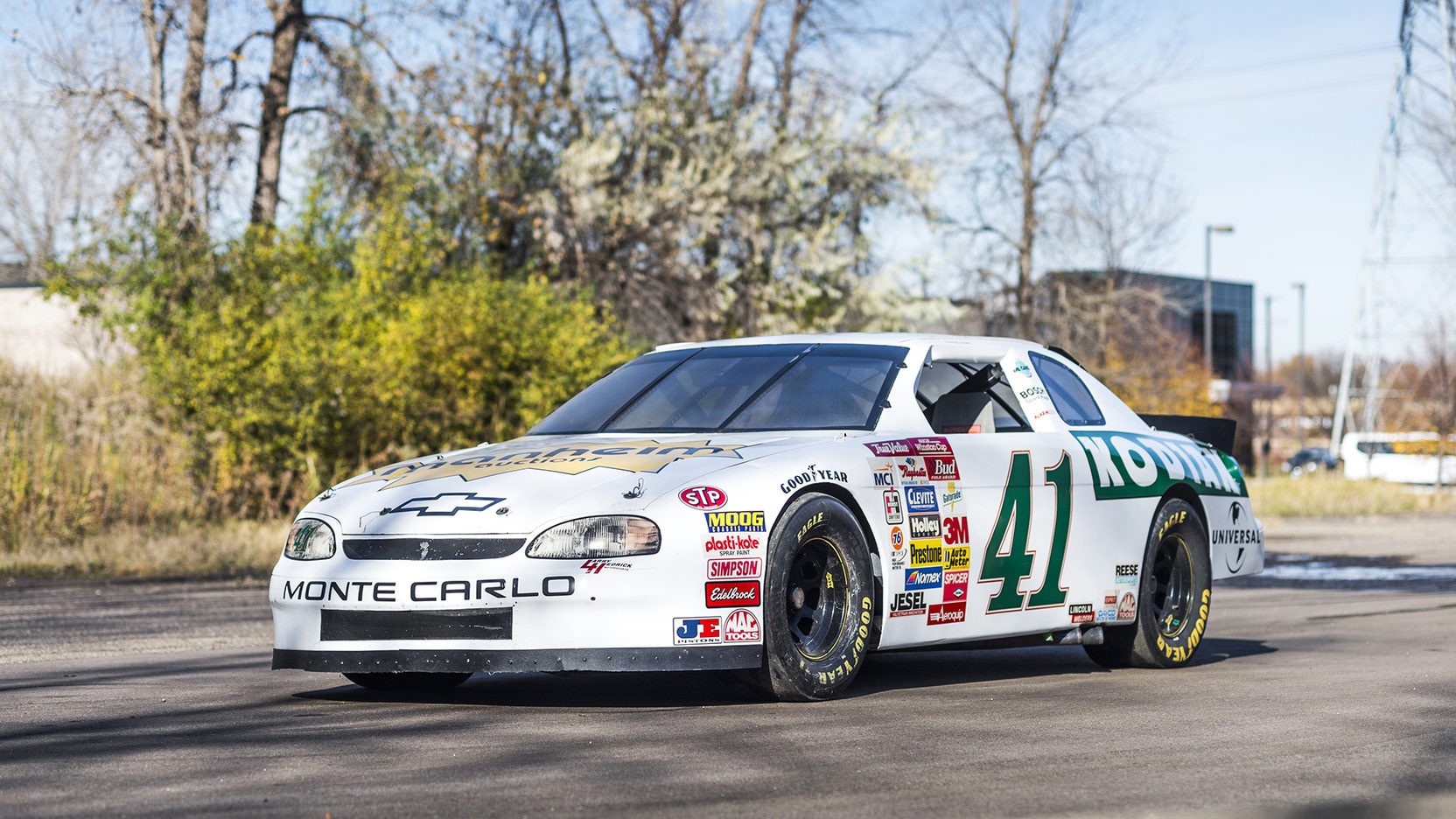 Did you know that Chevy copied Ford in their 1995 Monte Carlo? And it wasn’t FWD (Ford had RWD) or V6 (Ford had V8), but the body shape of the car, which was almost identical to the 1987 Ford Thunderbird. The reason was pretty obvious – the body shape of Ford’s car was absolutely perfect for NASCAR racing.

The first driver to win the Daytona 500 on the 1995 Chevy Monte Carlo was Sterling Marlin in 1995. However, this car was made popular by Jeff Gordon (four-time NASCAR Sprint Cup Series champion, #24 of Hendrick Motorsports), who was the first in 1995 Winston Cup championship, having overtaken Dale Earnhardt (seven-time NASCAR Sprint Cup Series champion), who, by the way, also drove the Monte Carlo. Then Jeff Gordon won in 1997 and 1998. Thus, the majority of fans completely associate this red-and-rainbow race car with Jeff Gordon.

Although some still believe that Dale Earnhardt had the most epic and emotional Daytona 500 victory on the 1995 Chevrolet Monte Carlo in 1998. This, by the way, was his first victory in this car. 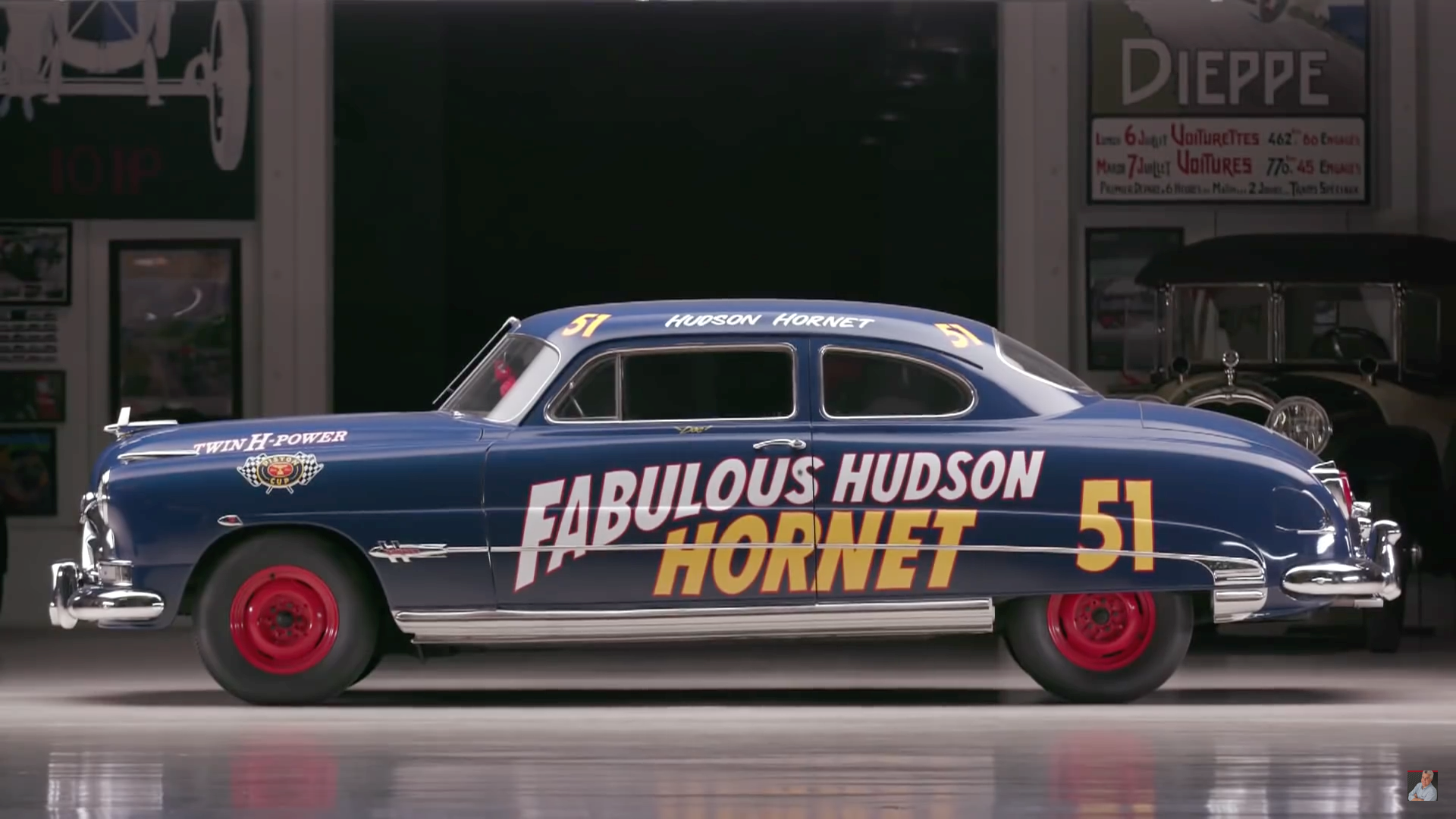 And now for something even more old-schoolish. The Hornet was the fastest full-size production car that has been manufactured by Hudson Motors in Detroit, Michigan from 1951 to 1954, and then American Motors, from 1955 to 1957 in Kenosha, Wisconsin.

The first generation Hudson Hornet had a functional streamlined design; the bottom and chassis had a lower center of gravity, which allowed the car to perform well in racing. The second-generation Hornet was a restyled Nash version, sold under the Hudson brand until 1957.

In 1952, Marshall Teague, also often called the “King of the Beach” for his performances at the Daytona Beach Road Course, finished the 1952 AAA season, beating his closest rival by 1,000 points and winning 12 of the 13 races. The Hornet, driven by Herb Thomas, Dick Rathmann, Al Keller, Frank Mundy, and Tim Flock won 27 NASCAR races. A Teague’s stock Hornet, which won 14 AAA racing circuits during the season, was named the Fabulous Hudson Hornet. This brought the Hornet’s season record to 40 wins in 48 events with a winning percentage of 83%.

By the way, the original Fabulous Hudson Hornet is currently in the Ypsilanti Automotive Heritage Museum, Ypsilanti, Michigan where the last dealer of Hudson, Miller Motors, was previously located. 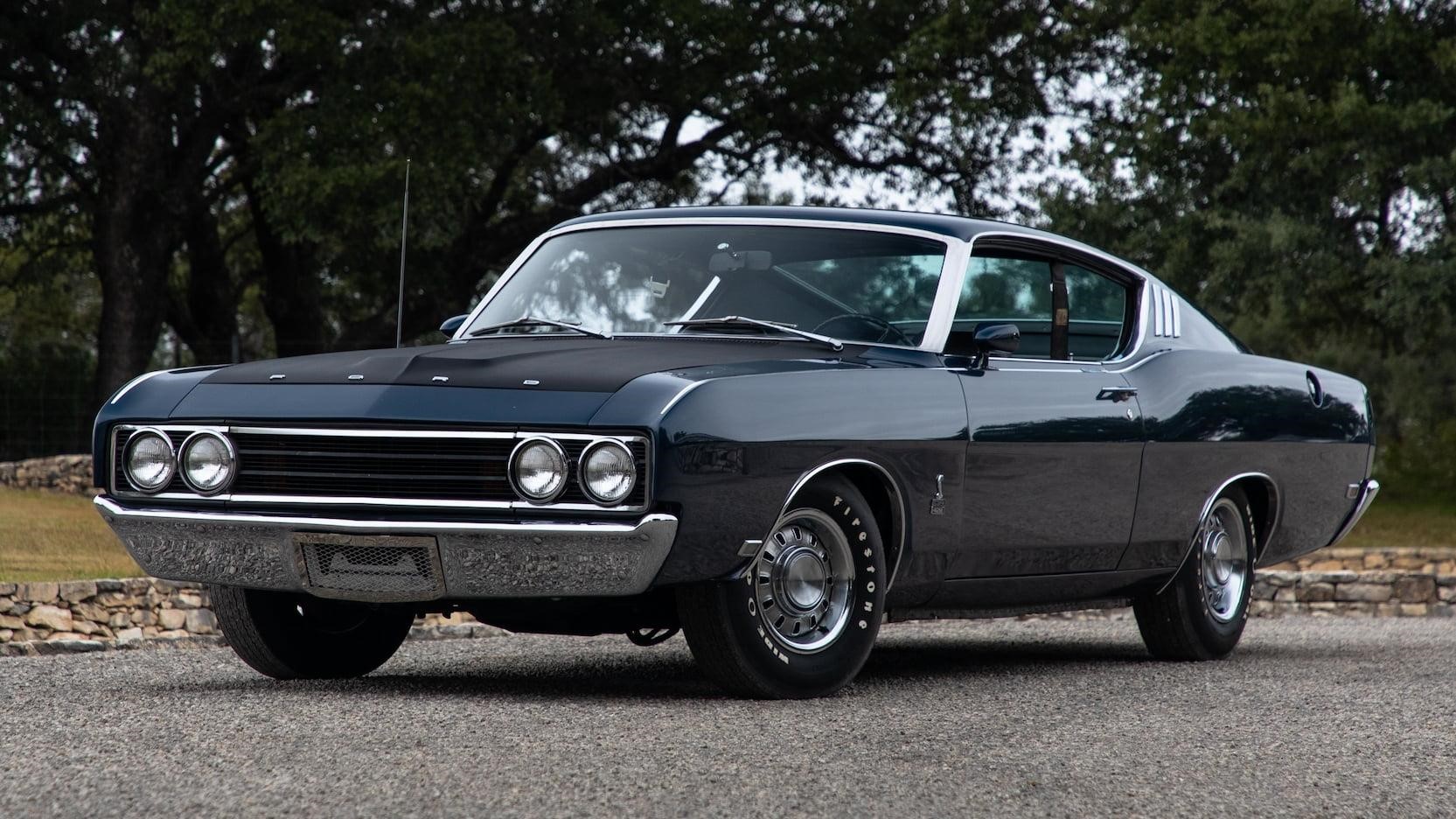 In the late ’60s, Ford and Chrysler fought for the NASCAR championship. In 1969, Ford launched new aerodynamic Torino cars, which allowed them to be the first in production car racing and achieve 30 wins. To be approved for racing, the company had to build at least 500 production Torinos, adapted for road conditions. That’s how the Ford Talladega appeared.

Although this car looks rather sluggish, it was a response to the long contemplation of faster Mopar and Chevrolet tail lights. Talladega’s nose was wedge-shaped with an extra 12 cm in length, and the flush-mounted grille replaced the production Torino part. The street version of the Talladega, named after the fastest NASCAR highway, uses 428 Cobra Jet engine with an output of 335 hp and a Drag Pack oil cooler. The car was a killer in the streets, and simply savage in the NASCAR config

To reduce the weight as much as possible, the Talladega had the simplest interior that, however, was equipped with a full set of accessories, standard vinyl-covered front seats, and a column gear shift for the automatic C6 gearbox.

Fastest Race Cars That Were Disqualified

Banning too fast race cars from participating in races may be unfair in regards to their brilliant designers but is intended to protect pilot lives. And even when technology is limited by certain regulations, race cars have become faster every year.

However, 2020 is the last year for Gen6 cars, and rumor has it that Gen7 stock cars are expected to be cheaper and slower, with their 550 HP power-limited next-gen engines. These restrictions will not apply in the 2020 season. Anyway, since we can still enjoy extreme performance and speed, here are a few examples of the fastest disqualified race cars that went down in NASCAR history.

Mopar cars were one of NASCAR’s most brilliant innovations but their aerodynamics was too good. Both models could easily reach 320km/h (almost 200 mph), which was not safe, so the organizers set the limit for the “winged” cars.

The famous car of the Hendrick Motorsports team is another example of a car that was affected by its designers’ brilliant work. Jeff Gordon was the fastest at the Lowe’s Motor Speedway, 1997 season, but the organizers have excluded further participation of the car because of its “too radical design.” (NASCAR rules had very few “loopholes,” but engineers managed to “use” them all).

Mark Donoghue masterfully interpreted the rules of racing, bordering with blatant cheating. His Penske Camaro Z/28 had hilariously low weight due to a specific acid treatment of its body components, which also made them quite brittle. When the Trans-Am organizers found out about this, they immediately banned this kind of lightening technology.

This car was not banned from NASCAR racing, it’s just that we at MechanicFAQ, were wondering here it’s the ugliest stock car that has ever taken part in NASCAR races? The Matador has existed for two generations. It was a coupe that looked more like a piece of brick with big-ass headlights and a rugged fastback, and it was this car that Roger Penské (an American businessman and entrepreneur involved in professional auto racing, as well as a retired professional NASCAR driver) used at his first attempt to achieve certain heights in NASCAR racing.

In the mid-’70s, despite its external unattractiveness, this car managed to be the winner in 5 races, for three years straight. Of course, it was mainly thanks to Mark Donoghue and Bobby Allison who actually made this car famous. Moreover, it was also about innovative, for that time, disc brakes on all four wheels. The American Motors Corporation completed its experiments with Matador in 1978. 10 years later, the company merged with Chrysler.